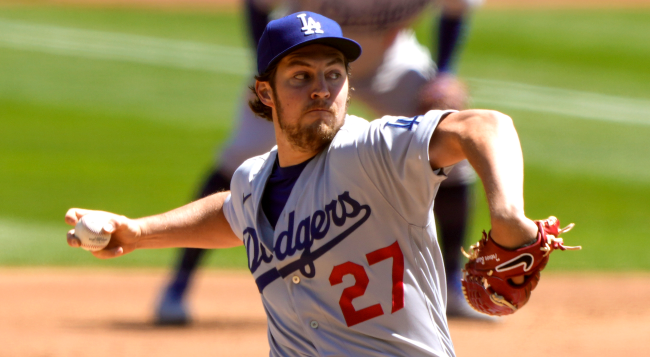 On Wednesday, new Dodgers starter Trevor Bauer pitched very well in the team’s 4 to 3 loss to the A’s, going 6-2/3 innings, giving up just 3 hits and 2 earned runs, striking out 10 and walking just 1.

Perhaps he pitched too good, because Ken Rosenthal of The Athletic reported on Thursday that MLB had confiscated some of the baseballs Bauer threw during the game and, according to sources, they were sticky and had visible markings.

Ironically, Bauer has been one of the most outspoken players when it comes to calling out pitchers for utilizing illegal substances while they pitch.

He also publicly mocked a new Major League Baseball policy, enacted prior to this season, that is supposedly going to crack down on the illegal use of foreign substances by pitchers and the very same data that he used to call out Astros pitchers (and others) since 2018.

Spin rate increases about 350 rpm on average in our tests when using pine tar vs no pine tar. That was at 70ish mph. The effect is slightly less pronounced at higher mph, but still between 2 and 3 hundreds rpm increase at about 90mph

Maybe those two things combined with the following tweet were enough reason for Major League Baseball to “randomly” select the baseballs Bauer threw on Wednesday.

I was using foreign substance to increase the spin rate illegally https://t.co/pnzgUR1NjV

We assume he was being facetious.

Interestingly, in 2020, when Bauer won the NL Cy Young Award, the spin rate on his pitches went through the roof (something that can be done by doctoring a baseball).

Thursday night, Bauer took to Twitter to fire back at the insinuations that he cheated and was using an illegal substance to enhance his pitches.

“Lol always fun reading desperate and misleading clickbait headlines from national gossip bloggers,” Bauer tweeted. “To translate fake journalist speak for y’all, ‘It’s unclear whether’ = ‘I can’t be bothered to look into this cuz it doesn’t fit my narrative.’ Wonder where the articles about balls from every other pitcher being taken out of play in literally every other game this season are?

“Also lol to @MLB who already has ‘sources’ talking to gossip bloggers about a supposedly confidential process a week into the season. Thumbs up y’all keep killin it!”

balls from every other pitcher being taken out of play in literally every other game this season are? Also lol to @MLB who already has “sources” talking to gossip bloggers about a supposedly confidential process a week into the season 😂😂😂 thumbs up y’all keep killin it! 👍🏻👍🏻👍🏻