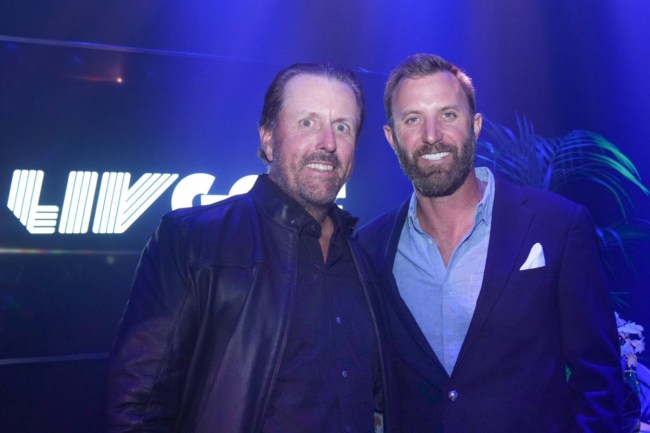 Outside of being seen playing golf in a very short video shared in April, the world hasn’t seen Phil Mickelson since he last played in a tournament back in early February. We’ve only heard from him a few times since then, most notably when he called the Saudis behind LIV Golf “scary motherf–kers” and the PGA Tour dictatorship. But, at long last, Lefty is back.

On Monday, Mickelson officially announced that he would be teeing it up in LIV Golf’s inaugural event in London on June 9-11. He showed up to LIV’s draft – yes, there is a team aspect to this whole thing – rocking a new look.

If Mickelson was looking to make a grand entrance it’s safe to say he accomplished just that.

Mickelson went with his trademarked all-black look and even showed up with some facial hair.

Mickelson showing up to the event wearing a leather jacket was an absolute guarantee. The odds of him sporting the leather were the same as water continuing to be wet tomorrow. However, the facial hair and perhaps some freshly dyed hair were a bit of a shocker.

Phil Mickelson is back in the public eye and looks generally surprised to be here pic.twitter.com/l7Vsq3jrvN

Phil Mickelson and Dustin Johnson look like a country duo from the mid-'90s who hosted a nightly TNN variety show that got cancelled over a prostitution scandal. pic.twitter.com/2NFgRbzhT3