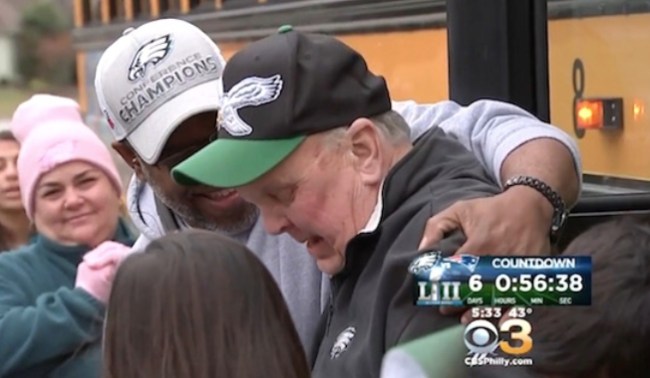 Ah, sports. The pendulum is constantly swinging from bringing the very worst out of people to the very best. For every three headlines about fans throwing snowballs at Santa or punching a police horse at a tailgate, you get one diamond in the rough. One story that makes you believe that warms your eyes and tingles your heart.

And that’s exactly the kind of story we have today.

Gary Kelmer has been a community staple in the Philadelphia suburb of Mount Laurel for decades. The 66-year-old die hard Eagles fan has positively impacted generations of kids and parents with his infectious kindness and gracious attitude, CBS Philly reports.

“He’s my favorite bus driver, and he’s very, very nice,” one student said of Kelmer. “Me too,” another added.

So, as the entire city of Philadelphia would kill to go this year’s Super Bowl in Minneapolis, Minnesota, the Mount Laurel community decided it would be best to send the man who deserves it the most. In just five days, the community, young and old, raised more than $5,000 to send Gary and his wife to watch his beloved Eagles try to win the city its first Super Bowl since the pre-Super Bowl era of 1960.

How nice is this. Mount Laurel parents who love their kids’ school bus driver so much, they raised thousands to send the big @Eagles fan to the Super Bowl. Gary Kelmer of Evesham has been driving school bus in Mount Laurel for 27yrs&to many families he IS family. @FOX29philly pic.twitter.com/UdYuquSmhC

On Monday, over 60 parents and children holding signs of support staked out at Kelmer’s last bus stop to present him with tickets, airfare, hotel accommodations, and even personalized Birds jerseys.

And who said Philly fans were all scumbags?

Check out the video over at CBS Philadelphia.