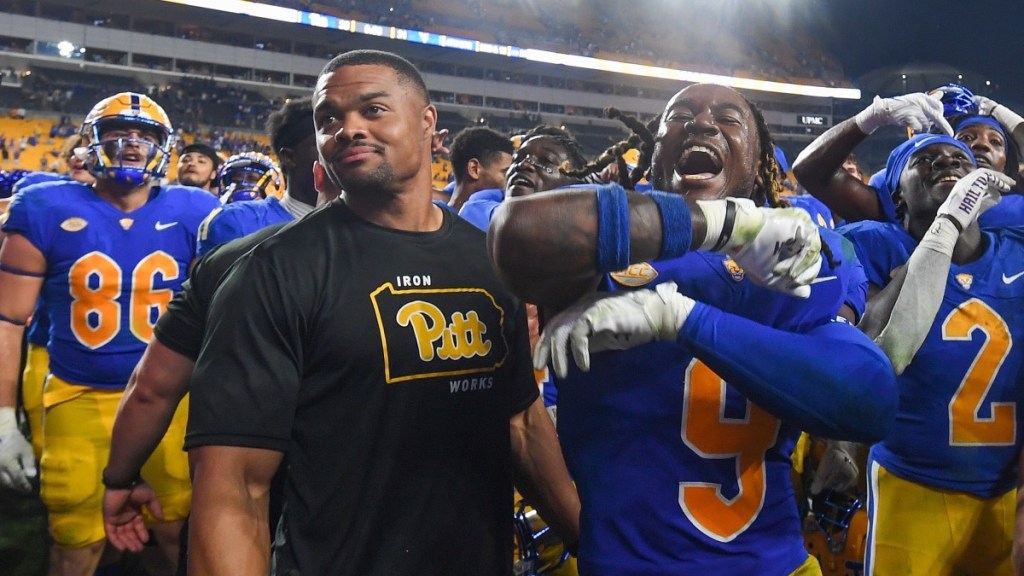 The first Backyard Brawl in 11 years breathed new energy into the WVU-PITT rivalry. The West Virginia Mountaineers and Pittsburgh Panthers hadn’t faced each other since 2011 but there was a lot at stake on Thursday night and the game delivered on the hype.

PITT came into the Backyard Brawl ranked #17 but the Mountaineers had won the past three meetings between the teams (2009-11). The Panthers are coming off an 11-3 season and are hoping to ride the hype train again this season.

And on the other side of the field, the West Virginia Mountaineers haven’t had a season above .500 since 2018. They are hoping to get back to winning ways and demanded to be taken seriously ahead of the renewed Backyard Brawl rivalry.

All Out Brawl Nearly Erupted After Backyard Brawl Rivalry Game

There were multiple CFB games on Thursday night but ESPN had the Backyard Brawl front and center. Pittsburgh eeked out the 38-31 win at home. The teams were tied 10-10 at the half but PITT outscored WVU in the 3rd quarter and though both teams put up two TDs each in the 4th, the 3rd quarter scoring was enough to propel PITT to the W.

After the game, players nearly got in an all-out brawl. Someone was hurling ‘keep sucking toes’ at the other players which isn’t an insult I’ve heard before but it’s certainly one that is Rex Ryan-approved, if you get what I’m saying:

The #BackyardBrawl nearly turns into a full brawl. Getting a little chippy as #Pitt players blow kisses to the #WVU players following The Panthers 38-31 win over the Mountaineers. #H2P @KDKA pic.twitter.com/3I8w85K6M9

Things got heated but the staff and leaders did a great job at diffusing the situation. Nobody threw a punch or got themselves suspended. Just some hilarious insults about sucking toes thrown around.

Next year’s Backyard Brawl heads to Morgantown, West Virginia. WVU will have the rowdy home advantage. It’s great to have this rivalry back in NCAAF!