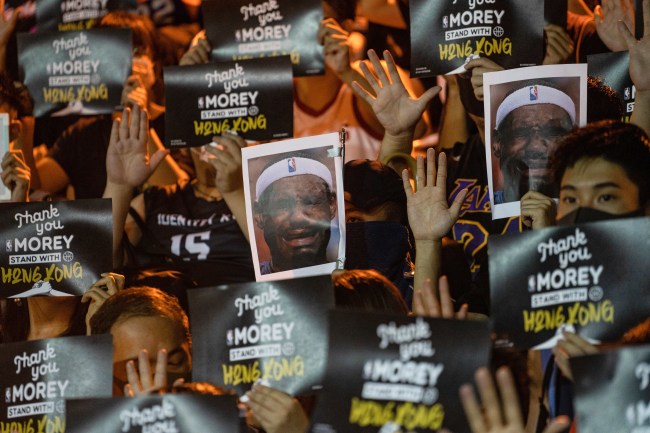 I’m sure you know most of the details by now on how Houston Rockets GM Daryl Morey kicked off a maelstrom of fury from China with a pro-Hong Kong tweet. This happened while NBA teams were playing exhibition games in China and the players were censored from speaking on the topic along with reporters.

After Morey’s tweet, there was a literal army of pro-China Twitter trolls (and some bots) attacking Morey with 170,000 tweets sent his way. Most of those accounts had never tweeted before, didn’t have followers, and a report from the WSJ suspects it could’ve been part of a targeted effort on behalf of the Chinese government itself.

Then came LeBron James opening his mouth and saying the dumbest and most misinformed shit anyone has ever heard from LeBron. It’s evidence that ‘King James’ is living in a bubble and thinks with his wallet, not about having to fight for personal freedom and liberty. Protestors in Hong Kong are burning LeBron’s jerseys, LeBron reportedly demanded the NBA discipline Daryl Morey, LeBron’s former teammates and even South Park are speaking out against him.

Then there’s this story which you came to read about. A Warriors fan in the Bay Area was so fired about about LeBron’scomments that he launched a GoFundMe to raise money for pro-Hong Kong Freedom t-shirts that would be passed out before the Lakers vs. Clippers season opener at the Staples Center on October 22nd. The shirts look great, by the way, there are photos below.

The (now paused) GoFundMe set out to raise $22,000 and made $42,994 before it was paused. Here’s the mission of this effort listed on the GoFundMe page:

China is trying to censor the Houston Rockets (update: and now the ENTIRE NBA) because of Hong Kong. Wouldn’t it be hilarious if on opening night in Staples Center the NBA fanbase made a collective demonstration against censorship by wearing “STAND WITH HONG KONG” T-Shirts?

The ruling party of China is trying to muzzle Houston Rockets GM Daryl Morey and censor all appearances of the Rockets in China, because Morey had the temerity to express support for the HK protest movement. Right now the NBA in China has just 29 teams: the Rockets have been sent down the memory hole.

This heavy-handed top-down censorship is silly. So: wouldn’t it be hilarious if on opening night in Staples Center, Lakers vs Clippers, Kawhi vs. Lebron, the NBA fanbase made a collective demonstration for free expression by wearing “STAND WITH HONG KONG” T-Shirts? Let’s raise money to buy/print and distribute these T-Shirts outside Staples Center October 22. Any funds left over, if insufficient to keep buying more T-Shirts for later games, will be donated to Civil Human Rights Front, the NGO advocating for greater democratic development in Hong Kong.

I read somewhere on Twitter that the LeBron-China shirt on Barstool is already one of their best-selling t-shirts in history so it isn’t at all surprising that this GoFundMe campaign would draw the same interest, especially when it’s something that LeBron will be forced to face at the Staples Center in his first game of the season and throughout the rest of the 2019/2020 NBA Season.

These are the steps outlined on the GoFundMe page:

What is the Plan?

1) Print a bunch of shirts.
2) Stand outside Staples on October 22 and hand them out to fans along with a small card explaining why you should wear the shirt.
3) Give the NBA community the chance to express their solidarity with HK, for free speech, and against foreign attempts to silence American citizens.

here’s a look at the shirts tweeted out by the guy who launched this GoFundMe:

#HKShirtGiveaway test prints. Getting ready to hand these out at NBA opener in LA Oct 22! DM me if you want to help hand out T-Shirts with @Stand_with_HK/ https://t.co/eqamtj3aR5
Other people running #HKShirtGiveaways at other games/events – get in touch if you want the files! pic.twitter.com/34hC7Hqy7y

DM to learn how you can help pass out shirts at NBA opening night in LA! (Apologize if I am slow to reply). pic.twitter.com/nvwM3ju66B

After LeBron’s idiotic comments his own tweets have been used against him and there’s an NBA 2K20 clip where LeBron boasts about speaking for ‘those without a voice’ that he’s currently getting roasted for.

If you want to follow this you can check out @Sun_DMoreyFan on Twitter to see the finished t-shirts and learn about how you can get involved. According to LA Mag, this dude is going to LA for the season opener to see this campaign to the finish.