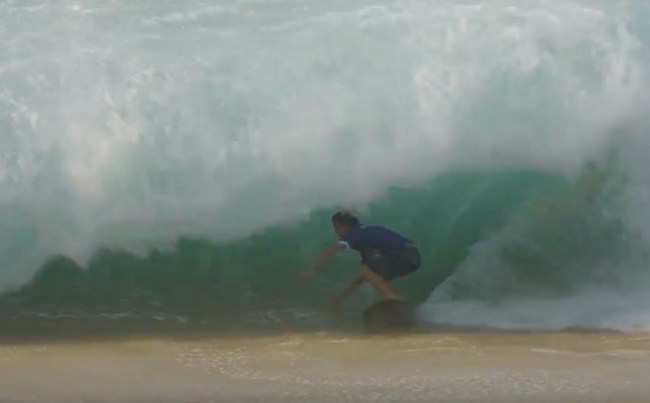 The waves were going off at a heavy shorebreak in Cabo San Lucas last week. If you’re not a surfer, this means that the waves were essentially crashing onto the beach instead of a few hundred yards out where you’ll most often find surfers riding waves.

What does a heavy shorebreak mean for surfing? Well, not much for surfers. But for bodyboarding and skimboarding, it means they can ride giants that are usually out of reach.

Bodyboarders can at least paddle out to waves like surfers but it’s still easier for them to run into waves like this if they’re breaking on the shore. For extreme skimboarders, this is about as good as it gets. You’ve got heavy ass waves crashing right on the shore so you can run into them and ride out AND because they’re so close to the shore you don’t have to deal with surfers paddling into the waves, it’s all free real estate.

The flipside of these waves crashing right onto the beach is if you don’t catch the break right you’re going to get your head smashed right into the sand and it could easily knock you out or leave you with a concussion. I know because I’ve had the wind knocked out of me and dislocated my right shoulder by a wave exactly like this in Bocas del Toro, Panama.

These bros are professional skimboarders. The best of the best. They know what they’re doing. But they’re still getting rocked by 50% of these waves.

By the way, the two dudes in this video are Lucas Fink Jr. of Rio de Janeiro, Brazil and his bro Gary Abdulla, another pro skimboarder. You can follow Lucas on Instagram at @lucasfinkrj if you dig the footage below (you will).

Watch closely as the wave picks these dudes up and slams them head first into the hard sand. And when they manage to catch the wave perfectly they’re actually able to pull off some sick ass tricks.

WATCH NEXT: ‘I’d Just Died In My Head’ — Surfer Recounts Terrifying Incident Of Being Held Under For 3 Waves

In terms of sheer entertainment, I’d put this clip up there with just about any surfing footage we’ve seen in 2018 other than when Brazilian Surfer Rodrigo Koxa set the new world record for the ‘largest wave ever surfed‘ during an epic swell at Nazaré, Portugal.

We’ve seen some truly epic wipeout highlight reels in the past year. This one of the Gnarliest Wipeouts at Mavericks comes to mind. So do these nominees for ‘Wipeout of the Year’ from the WSL Big Wave Surfing tour.

Here are BroBible, I try and cover all the sports that are near and dear to my heart and that includes Surfing even though I’m one of the most god-awful surfers in the world. So if you ever come across any badass surfing clips, or have any clips of your own, you can shoot them my way on Twitter at @casspa or you can email them over to cass@brobible.com, and if they’re good enough I can feature them here on the site or over on the BroBible Instagram page.

Getting back on topic, here’s a photo from Lucas Fink’s Instagram, the skimboarder above.

This has to be photoshopped, right? It’s TOO perfect.