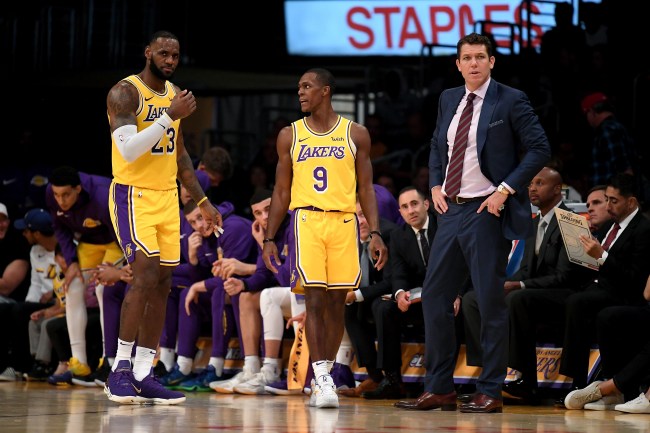 News broke late Sunday night that Lakers guard Rajon Rondo suffered a broken right thumb in practice Sunday in Orlando and will miss anywhere from six to eight weeks after undergoing surgery. Sunday’s practice was only the Lakers’ second since arriving in Orlando on Thursday night.

Los Angeles losing the 34-year-old guard is a major blow as the Lakers were going to rely heavily on him after starting guard Avery Bradley opted not to join the team for the NBA restart. Quinn Cook is now the lone ‘true point guard’ on the Lakers’ roster, but LeBron James can certainly man that position when needed. Rondo is averaging 7.1 points, five assists, and three rebounds per game this season.

Los Angeles did sign JR Smith as Bradley’s replacement following his decision to sit out the restart, but now it looks like Smith will be thrown right into the fire with Rondo set to miss significant time as well. Lakers fans will now be holding their breath in hopes that Smith will be keeping up with the score in future games and a 2018 NBA Finals situation doesn’t take place this season.

Smith has not played in a single NBA game this season as he was a free-agent prior to signing with Los Angeles. He played in just 11 games a season ago with the Cavaliers averaging 6.7 points per contest.

Related: Rajon Rondo Said His $400 A Night Disney Hotel Room Looks Like A Motel 6 Room And The Internet Lost Its Mind