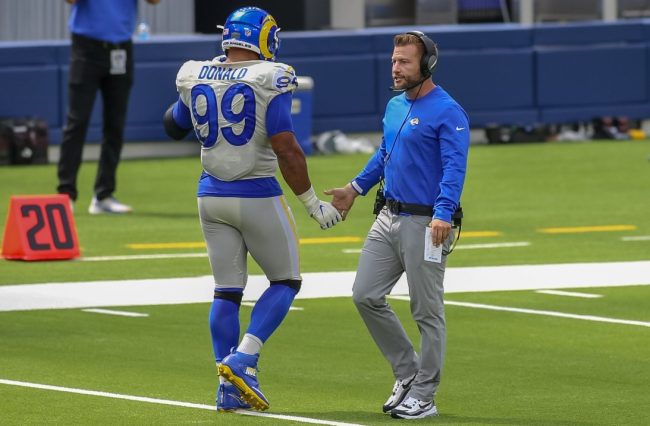 An absolute bonkers fight took place on Thursday as the Los Angeles Rams and Cincinnati Bengals collided during their joint practice. It go so out of hand, that Aaron Donald swung a helmet, made contact, and was manhandled to the ground. Obviously, it’s not an ideal situation, as Sean McVay is not a happy camper about what transpired.

According to Jourdan Rodrigue, the Rams head coach jumped in the middle of the scrum in an attempt to stop the commotion. Although the players were going at it, coaches have to do everything possible to stop the fighting. Even though Donald did swing a helmet violently, it sounds like Sean McVay legitimately tried to slow things down. Here’s his full statement below.

A furious McVay jumped into the scrum that ended practice. “I don’t know what I was, I just see guys swinging and some guys have helmets on, some don’t, you just never know what can occur. My biggest concern is unnecessary injuries …” (added that he didn’t think anyone got hurt)

It was an ugly sight to see as Aaron Donald is taking most of the heat, and rightfully so. Fights happen all the time in joint practices but it’s rare for them to get this out of hand. There must be some pent-up aggression between the Rams and Bengals after the two faced off in the Super Bowl. Even so, that is no excuse for Donald to act the way he did.

#Rams Aaron Donald used a #Bengals helmet to hit Cincy players after a fight broke out at joint practice. pic.twitter.com/GmfnsdCinJ

We’ll see what comes of it. During practices, the league doesn’t have authority over what transpires. Instead, the Rams will be left up to make a decision. Even though Sean McVay isn’t happy with the fight, it’s hard to imagine he suspends the best player on his team to begin the 2022 season.