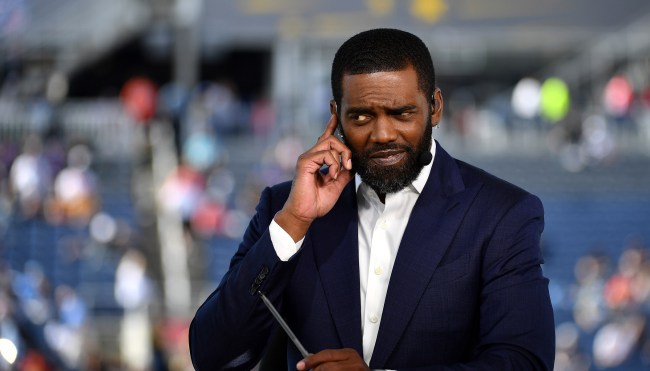 43-year-old NFL Hall of Famer Randy Moss is becoming quite the football pundit these days. Four-plus years into his run working for ESPN as an NFL analyst, the six-time Pro Bowler appears to really be learning the fine art of spewing terrible hot takes in order to draw attention to himself and his network.

For example… back in November, Moss caught heat for singling out a high school player on ESPN’s “C’mon, Man!” segment.

In December, Moss claimed Jerry Rice is the third or fourth best wide receiver in the history of the NFL behind himself and Terrell Owens.

And now, in what’s becoming a monthly occurrence, Moss is back with yet another hot take that makes little to no sense whatsoever.

Speaking on ESPN’s NFL Postseason Countdown show on Sunday, Moss went off on a strange tangent about why he thinks new Jacksonville Jaguars head coach Urban Meyer will struggle transitioning to the NFL.

While some of what Moss said hit on the usual “college coach going to the NFL” talking points, it was when he delved into how he believes the city of Jacksonville handles social justice and crime that things went a wee bit off the rails.

“Social justice, being out in the community, Jacksonville Jaguars and the state of Florida, Duval County is not a good county to be in,” said Moss. “So I really think that Urban Meyer, and I’m talking about the violence, not just the people, and the crime in Duval County … so when I look at Urban Meyer coming to this team, he has a lot to be working with, and it’s not just the team. The Black Lives Matter, everything that’s going on in our country right now, with COVID, there’s a lot of concerns going on. I just wish him the best of luck.”

What any of that has to do with whether or not Meyer will be successful coaching the Jaguars is a bit of a mystery.

Randy Moss is anxious to see what Urban Meyer can do with the Jaguars if they draft Trevor Lawrence No. 1 overall 🍿 pic.twitter.com/aHq6eyFFwC

Nowhere on that list was Jacksonville. And even if it did appear on the list, what does that have to do with Urban Meyer being a successful NFL head coach? The Ravens, Browns, Saints, Titans, Bills, Bears, and Colts all seemed to have pretty good years, making the playoffs despite all the crime happening around them.

Also, I’m pretty sure COVID and Black Lives Matter are also pretty prominent issues in the 31 other NFL cities as well.

Needless to say, fans on social media, especially those who live in the Jacksonville area, were also very confused by the odd take offered up by Moss.

Damn @RandyMoss u should correct yourself publicly talking about Duval like that.

Did I miss him saying this about Dan Campbell in Detroit?

Wtf the city crime had to do with nfl football ? & plus it’s crime in every city !

What you have just said is one of the most insanely idiotic things I have ever heard. At no point in your rambling, incoherent response were you even close to anything that could be considered a rational thought. Everyone in this room is now dumber for having listened to it.

Talk about the team all you want, crossing the line talking about my city.. #DTWD

getting paid to talk gibberish

See? I told you Moss was beginning to catch on.