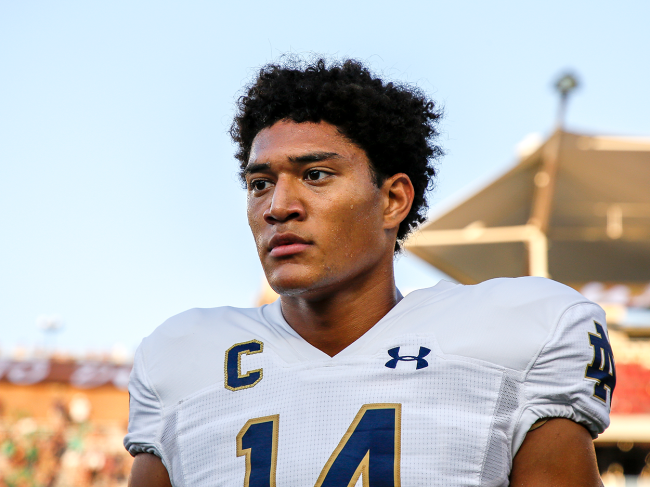 Ravens fullback Pat Ricard is a bowling ball. The 27-year-old stands 6-foot-3, 300 pounds and if you get in his way, you are getting run over.

In addition to clobbering people at the fullback position, Ricard also moonlights as a defensive lineman. Ricard played defensive tackle at Maine before moving primarily to the offensive side of the ball in the NFL. When he does line up on defense, however, he is a real monster there too.

On one hand, Patrick Ricard practices full time with the offense.

On the other hand … pic.twitter.com/KqCw2NGvuJ

All of this goes to say that to voluntarily decide to challenge Ricard one-on-one requires a certain level of lunacy. Kyle Hamilton is not a loon.

Hamilton, the team’s first round pick in the 2022 NFL Draft, played safety at Notre Dame and is slated to start for the Ravens this fall. He recently passed on the opportunity to try Ricard in practice.

It all started when Ricard asked if there was anyone who could challenge him in an Oklahoma Drill and posted a photo of himself looking huge.

Who could beat me in a Oklahoma drill 🤔🤷🏼‍♂️ pic.twitter.com/kK43v0SUvf

In response, Baltimore veteran defensive back Marlon Humphrey, who has already teased his rookie counterpart with an expensive request, immediately responded to Ricard saying that he overheard Hamilton saying that he wanted the smoke. That obviously did not happen and Hamilton wanted to make that very clear.

He replied to Humphrey in hilarious fashion and introduced himself to Ricard as the “rookie from practice” before making sure the veteran fullback knew that he does not want to line up against him in an Oklahoma Drill.

Hey @PRic508, I’m the rookie from practice earlier today. This is a lie. https://t.co/jjVdbkjeil