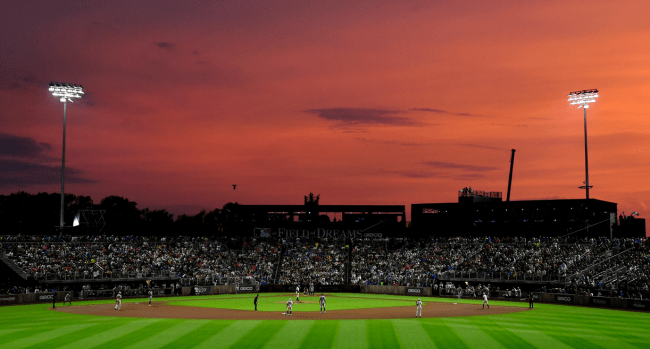 It has been well chronicled over recent years just how much Major League Baseball struggles when it comes to designing and creating special one-off uniforms and caps.

People were even upset by the 2021 Field of Dreams game uniforms last year because, while they looked spectacular on the White Sox and Yankees, fans hated the obtrusive Nike logo on the jerseys.

However, since there is really nothing anyone can do about that, more fans now seem resigned to it happening and are still very appreciative of how cool the throwback uniforms look.

At least if the reactions to the Chicago Cubs and Cincinnati Reds’ Field of Dreams game uniforms, which were revealed by Major League Baseball on Monday, are any indication.

Have to admit, those are pretty sick. Major League Baseball should have teams wear old timey uniforms like this more often.

Can't wait to see the @Cubs rocking these unis for #MLBatFieldofDreams! 🌽 pic.twitter.com/w5gGMDxVsd

The 2022 Field of Dreams game in Dyersville, Iowa is coming up on August 12

The uniforms that Reds will be wearing are from the year 1919 when they won the World Series in controversial fashion over the Chicago White Sox, AKA the infamous Black Sox. The Cubs will be sporting jerseys from the late 1920s team that starred future hall of famers Gabby Hartnett and Hack Wilson, along with caps inspired by their 1914 season.

The Reds will be the home team for the game, but the Cubs’ Triple-A team is based out of Des Moines, Iowa so they may still have the crowd on their side.

Bring these back, permanently.

“I think it’s going to be an incredible experience, especially for a lot of us who grew up watching the movie,” Reds manager David Bell said when the game was first announced.

“I’m excited,” Cubs manager David Ross said. “I’ve gotten to go to that venue before the Major League park was built, and it’s a neat place in general.”

The Reds are currently 15.5 games out of first place in the National League Central, while the Cubs enter today 16.5 games back of the Cardinals.