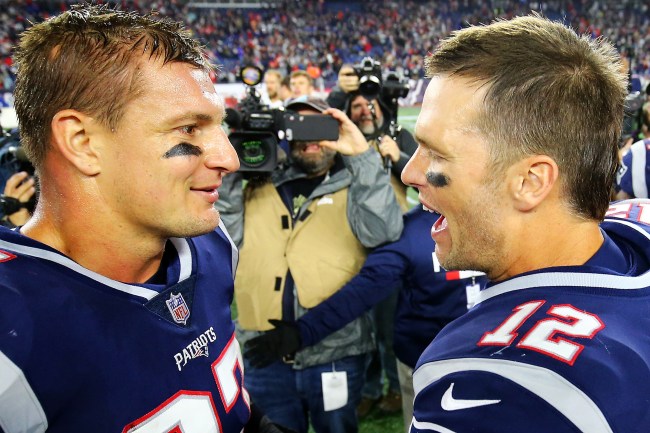 Rob Gronkowski might not be catching passes in the NFL anymore, but the dude still has a pretty good sense of humor — which, whether he’s on the gridiron or not, will probably never disappear. And, while there have been rumors about Gronk returning to the New England Patriots at some point, the bullish tight end discussed that he may not be ready mentally to get back on the field quite yet, but didn’t completely rule out a possible return if he gets that itch to play at some point again.

While much of what Rob Gronkowski’s saying now is more about the scary injuries he sustained during his NFL career than actually playing in the league again, the former player did joke about what it would take for him to change his mind. Talking with Adam Schefter on Schefty’s podcast, Gronk outlined the strange requirements it would take to return to the Pats, which, obviously, aren’t too serious — I think? One specifically calls out what Tom Brady would need to do; and it includes rub downs while doing his TB12 method.

“I’m gonna be doing his treatment, doing his pliability, and if he comes over and rubs some CBDMedic on me,” Gronkowski told Schefter on Schefter’s podcast, “then I’ll feel twice as good then and I’ll be ready to go.

“There would have to be some rules, like ‘All right, am I just showing up to the game? Like, are you going to give me a game plan on Saturday? Do I have to stay at the hotel the night before?’ What if I just showed up to the game one day and just did the transaction?”

“And I just have like five plays in the game, they’re all go routes and he just launches up the ball to me five times. … Just throw me the ball five times. I’ve got five plays.”

Obviously, Rob Gronkowski’s not actually demanding Brady rubs CBD lotion all over him, but, hey, if that’s what it would take for the GOAT to get his favorite target back on the field, who knows if he’d be willing to do it? Let’s all hope we never have to find out the real answer.

After the jokes, Gronk did get serious about any possible NFL return, telling Adam Schefter what he’s been saying for awhile now — that, unless his mind’s right, he’s not getting back into a helmet and pads again.

“The only thing, I talked about it already, I know I’ll be there physically to be able to play the game of football again, hands down,” he told Schefter. “That’s why I took off, because I needed my body to recover. I love being fit and love staying in shape. … I know physically I’ll be able to be there, for sure. It’s just if I have that desire to come back and play. … I’m just staying busy with (business). It’s not like I’m not waking up with a passion. I’m waking up to get things done every single morning.”

“I’m really truly enjoying it, and I feel if I have that desire, and I feel like my name is getting called and there’s a passion within myself and it’s a consistent one, then that’s the time I’d entertain coming back.”

Time will tell if Gronk gets the itch to play again, but, right now, it sure sounds as if he’s got a pretty great set up for himself in his next chapter — and it doesn’t require taking hits from 250-pound dudes who want to take his head off, so, yeah, it’s just a little bit better.