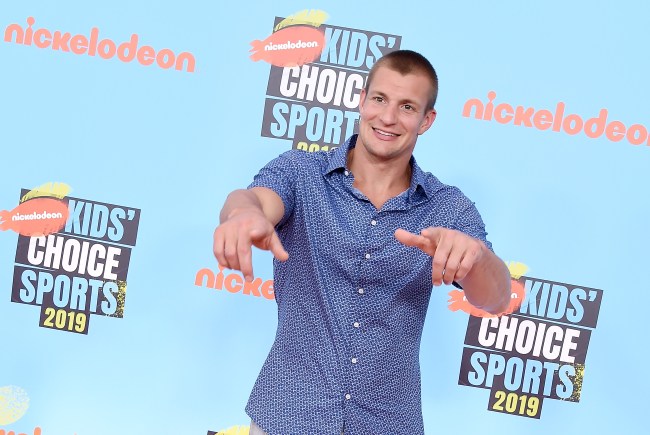 Rob Gronkowski sort of shocked everyone a couple of months ago when he abruptly retired from the NFL, ending a probable Hall of Fame career for one of the most entertaining athletes ever. And while New England Patriots fans are crossing their fingers that Gronk does make a comeback at some point — which has been a rumor and topic of conversation among people in the media — we may get a better idea by the end of the month.

That’s because, according to Pro Football Talk, Rob Gronkowski has announced a surprise press conference on August 27 to a explain his “next chapter,” which, knowing the former tight end, could be anything from a wrestling career to a cooking show to becoming a teacher. OK, so the latter suggestion might be a little out there, but would anyone really put it past the guy?

Here’s a description of the anticipated announcement.

At an invitation-only event held in New York City, Gronk will unveil his “next chapter.” Given that both the email and an accompanying graphic use the term “chapter,” there’s a chance Gronkowski has authored (or at least co-authored) another book.”

Who knows what the hell Gronk will reveal to the world in a couple of weeks, but, whether it’s a book, movie or something else, I’m sure it’ll be done in an entertaining way. And, since Gronkowski has the world at his fingertips and is such a wild personality, Twitter offered up some pretty amusing theories as to what the guy might be announcing; take a look below.

@RobGronkowski is joining the entertainment company: "Prestige Worldwide" he will be co-hosting with Brennan Huff and Dale Doback at The 2019 Fucking Catalina Wine Mixer. pic.twitter.com/VekVOIp6KS

He's gonna be in Space Jam 2

That Brady and him used PED and the patriots are cheaters

He’s the one who deflated the football.

Him and Robert Kraft are opening a chain of massage parlors? 😳😂

The NFL will undoubtedly miss Rob Gronkowski this season — assuming he doesn’t surprise everyone by making a comeback. And, while the Pats will miss his production on the field and down-to-earth personality in the locker room, I’m sure every single one of his former teammates will be paying close attention to what the former tight end has to announce on August 27; while sharing some concern that he may shock the world by saying something crazy.