Is It Crazy For Me To Think Russell Westbrook Is A Top-10 Player Of All-Time? No. No, It’s Not 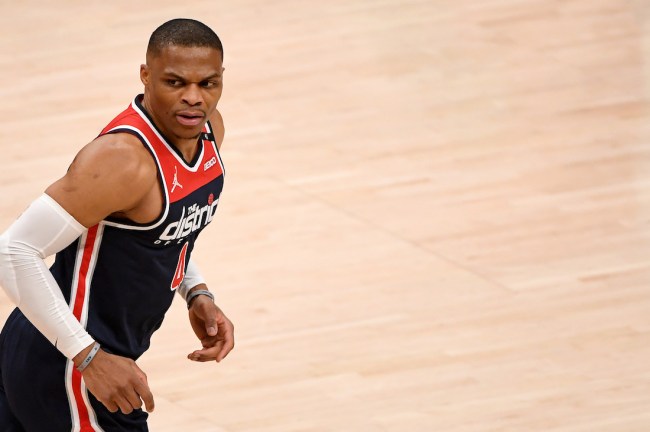 It’s time to admit it, guys: Russell Westbrook is one of the greatest NBA players of all-time. I’m not talking about top-50 or even top-25, either. I’m saying the Washington Wizards point guard is a bonafide top-10 player ever — so don’t at me. An unpopular opinion? Absolutely. But is it legit something we should be considering at this point in his career? You better believe it.

More than just the remarkable stats he’s been putting up recently, Westbrook plays with energy, athleticism and a bullish style that we’ve never seen from a guy before. The closest comparison is Allen Iverson, who, pound-for-pound, might have been the best player to ever play in the NBA. But Westbrook doesn’t need to drop 50 for his team to win. Instead, he can merely take eight shots and score just 14 points and still lead the Wizards to an insane 154 points. On those days when he needs to score more — as he did the other night when he dropped 42 points on 30 shots against the Dallas Mavericks — the former league MVP’s more than capable.

From 1962 to 2016, Oscar Robertson was the only player in league history to ever average a triple-double for a season. That seemed to be an untouchable record. But, guess what? Russell Westbrook has now done it in four of the past five seasons — with the point guard already locking up another campaign of doing so this year, even if he doesn’t score or have an assist or rebound in the remaining seven Wizards’ games this season.

Russell Westbrook will average a triple-double in a season for the 4th time in his career. Oscar Robertson is the only other player to do this & he did it once in 1961-62.

He could record 0 pts, rebs & 0 asts in every game the rest of the season & still average a triple-double. pic.twitter.com/kOzjsVAzCw

It’s hard to believe that we’re all just taking Russell Westbrook’s greatness for granted. Sure, the guy has his frustrating moments — like when he forces shots and almost tries too hard during clutch time — but the NBA has always been littered with superstars who do that, so we shouldn’t hold it against Russ. Instead, we should appreciate what we see each year from him, because we may never see another guy have this type of all-around game ever again.

Now, this is probably where you’re asking yourself what I’m smoking to think Westbrook’s not just one of the greatest NBA players of all-time, but actually falls in my top-10. Fair enough, I’ll explain.

Let’s just go ahead and use a similar format as the great Julius Erving recently did, with the Hall of Famer being asked to name his First Team and Second Team of all-time NBA greats. Erving included the usual suspects like Michael Jordan, Wilt Chamberlain, Bill Russell, etc. — and famously left off LeBron James from his list — but also included guys like Karl Malone and Elgin Baylor, both of whom never won an NBA title. Using that as a guide, here are my top-10 list of the greatest NBA players of all-time.

Sure, you can argue for names like Robertson, Tim Duncan, Shaquille O’Neal and plenty of others to be added on either one of those teams — especially because they have multiple titles. But I’m taking Russell Westbrook, who will absolutely be in the same company as those other icons by the time his career is over. Remember, Russ is still just 32 years old, so it’s not out of the question to think he keeps this pace up for 2-3 more seasons. If he happens to win a title at some point, it’s a near lock that he’s in the top-10 all-time. Like, it wouldn’t even be a debate. Hell, as it stands now, I think he’s already there.

For those questioning the greatness, value and overall status of Westbrook as one of the greatest NBA players of all-time, this little nugget from longtime NBA writer Tim Reynolds may help blow your mind.

Trying to find a Russell Westbrook number that would surprise even a numbers geek like me.

Russell Westbrook isn’t just a flavor of the week. He isn’t just doing this in a season that’s blowing our minds. Averaging a triple-double is now his status quo. Think about that.

We praise Giannis Antetokounmpo as a freak who could become an all-time great one day, but refuse to accept that Russ is all that and more. Why? Maybe it’s because he’s flashy, outspoken, has a mean mugs that rubs people the wrong way. Or maybe it’s just because he’s had a volatile career alongside other superstars like Kevin Durant and James Harden and still hasn’t won an NBA title? Whatever the reason, it’s time to appreciate what we’re witnessing and admit that Westbrook is one of one in the history of the league. That makes him one of the top-10 players of all-time.