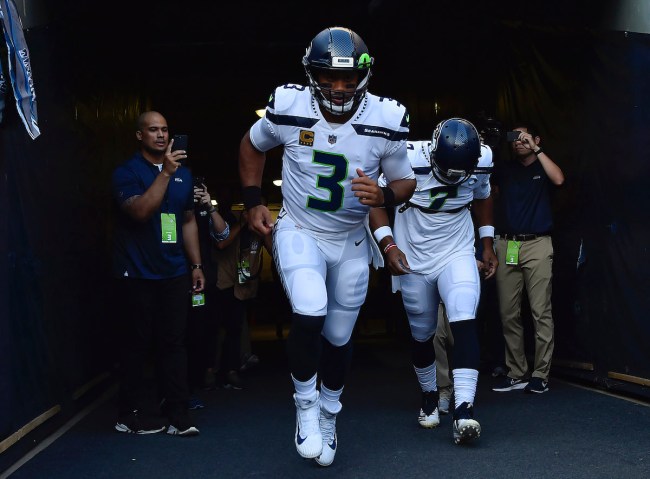 I honestly still can’t wrap my head around all these Russell Wilson trade rumors that have been floating around for the past few weeks. As someone who lives in Seattle, it’s absurd to think the Seahawks could dangle their franchise quarterback in such discussions, as the guy has carried them to the postseason in all but one of his seasons in the league. But if the past few months have taught us anything, it’s that this NFL offseason is about to be crazier than any we’ve ever witnessed.

Although Seattle’s doing the right thing by reportedly denying any conversations about Wilson’s future — pretty much shutting down any trade talks — we all know that the Seahawks’ front office is absolutely taking calls. That’s what you do, just to at least see if another team offers some wild package that is just too good to pass up.

One of the teams linked to Russell Wilson who could just go all in on acquiring the perennial MVP candidate? The Chicago Bears, which have been searching for a franchise quarterback since… well, forever, really.

After drafting Mitch Trubisky No. 2 overall in the 2016 NFL Draft — and not seeing him elevate the offense as they had hoped — Da Bears are searching for an alternative. Given Wilson’s talent and the perceived belief that he’s available via trade from Seattle, FS1’s Colin Cowherd talked about why the quarterback could be the “missing piece” that could elevate Chicago into the Super Bowl discussion.

“Mitch Trubisky went 25-13 with Matt Nagy,” Cowherd said. “What is he going to go? And also, Matt Nagy and Ryan Pace, the heads coach and general manager in Chicago, are a little bit on the hot seat. They don’t have the power of Pete Carroll, and that’s one of the things turning off Russell – very much so – in Seattle.”

Russell Wilson can be the missing piece for the Chicago Bears:

"Mitch Trubisky went 25-13 with Matt Nagy. What is he going to go?" — @ColinCowherd pic.twitter.com/ibGC0T4CUe

Considering the Seahawks haven’t had an offensive line to protect Russell Wilson for most of his career, it’s easy to agree with Cowherd’s take here, because the guy’s a future Hall of Famer who does things others can’t. Whether it’s the Bears or any other team, Wilson’s going to make every club better.

As for what the Bears might do, ESPN’s Jeremy Fowler explained why he thinks the franchise will be aggressive in its pursuit of Wilson, as the quarterback listed the club as one of his desired destinations if a trade from Seattle does happen.

“I expect the Chicago Bears to at least take their shot here because a source told me Russell Wilson likes that they have an emerging offensive line, a good offensive-mind in Matt Nagy, and an intriguing market in Chicago.”

Again, my gut instinct says Russell Wilson will be a Seahawk for at least another season, and that all of these rumors will end up being nothing. But the awkwardness between he and the organization is very real, and it’s something they’ll need to hash out during the NFL offseason to build back trust. But, as Cowherd points out, a team like Chicago could make things interesting if they think the quarterback is the man who can lead them to a championship — which presumably means giving up a lot to the Seahawks in order to get Wilson.