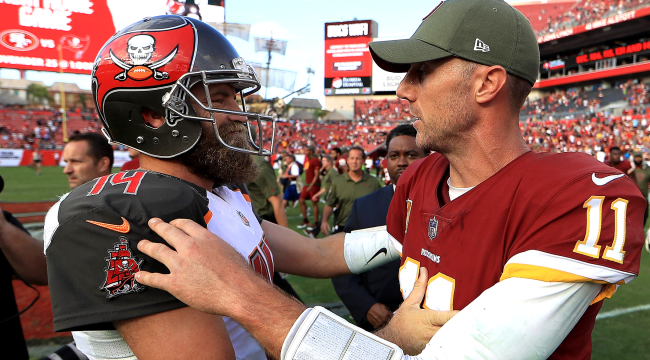 During his appearance on the Green Light podcast with Chris Long this week, Washington Football Team quarterback Ryan Fitzpatrick shared an A+ story about “the single worst text” he ever sent out in his life.

According to FitzMagic, that text occurred in 2018 right after now-retired Washington Football Team quarterback Alex Smith suffered a catastrophic leg injury against the Houston Texans.

After singing Smith’s praises in the wake of his retirement announcement, “He was a winner. He won when he was in San Fran at the tail-end there, when he was in Kansas City. And it wasn’t always the 300 yard games and five touchdown passes and the way it kind of happens now with some of these young kids, but everywhere he went, he made the team better,” Fitzpatrick was reminded of what he called “one of my biggest regrets to date.”

“When Alex broke his leg in that game a few years ago, I had what I thought was a similar injury: I fractured my tibia in 2014 with the Houston Texans,” Fitzpatrick revealed to Long. “So the single worst text I’ve ever sent out, I sent it to Alex. I said ‘Hey, Alex, just want to let you know they’ll fix you right up, you’ll be good as new. I’m out here and I don’t feel any pain from my injury three years later.’

“And I sent it and felt good about it, and he said ‘Well, mine might be a little more complicated.’ And 17 surgeries later, and the story of what he had to overcome, I felt like the biggest a–hole.”

On the plus side, for both Smith and FitzMagic, everything turned out well in the end.

“What he did last year, it was incredible for him to get back on the field, and I was very happy after sending that text that he didn’t lose his leg,” Fitzpatrick added.