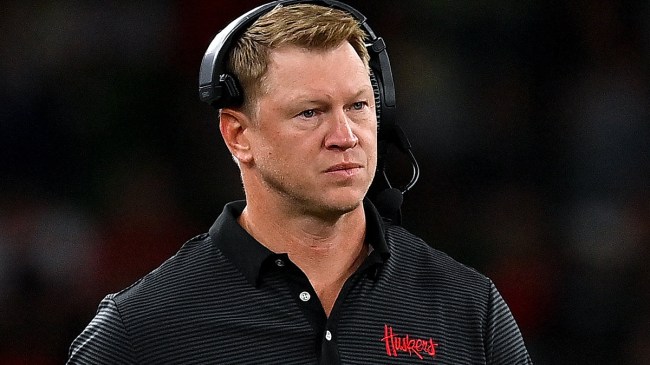 Last week, Nebraska’s football team headed over to Ireland to open their season against Northwestern at Aviva Stadium in Dublin, and it seemed like plenty of Cornhuskers fans headed into the contest with clear eyes, full hearts, and the sincere belief they couldn’t possibly lose.

That confidence wasn’t entirely misplaced when you consider Nebraska was favored to win by 11 points, but it was a bit hard to buy into the optimism surrounding the season when you consider how head coach Scott Frost has fared since taking over for Mike Riley in Lincoln prior to the 2018 campaign.

After all, Nebraska went 3-9 last season, and Frost headed into Saturday sporting a 15-29 record since kicking off a tenure that’s been largely defined by Nebraska’s inability to win close games under his watch; in his first four seasons, the team went 5-20 in one-score games—and that second number rose to 21 when the Wildcats walked away with a 31-28 comeback win on Saturday.

Frost was roundly criticized for the decision to attempt an ill-fated onside kick that swung the momentum in Northwestern’s favor in the second half, and he didn’t do himself many favors when he appear to place the bulk of the blame on the members of the offensive staff that he called out after the loss.

That obviously led to plenty of speculation that there’s some friction between the skipper and Nebraska offensive coordinator Mark Whipple. According to ESPN, a reporter asked Frost to address that potential issue during a press conference on Tuesday, and the coach opted to backpedal a bit while trying to make it clear he and Whipple don’t have any real beef, saying:

“No, not at all. He’s really smart. Really good at what he does.

We have a lot of other coaches who are really smart and good at what they do. We need to find our rhythm of putting all the best stuff together. I thought it was good on Saturday. It can be better.”