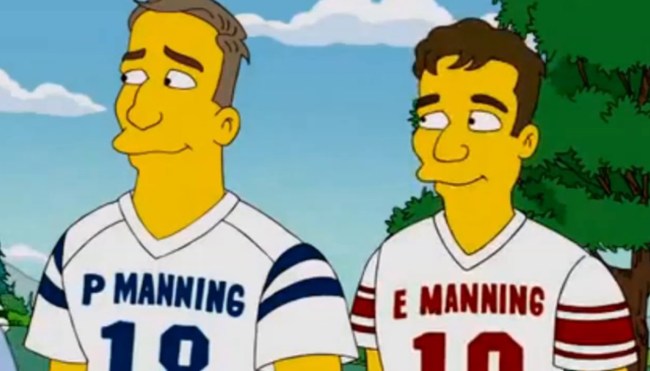 The 2021 NFL season has been filled with plenty of unexpected developments, but I think the most pleasant surprise has been the incredibly refreshing Monday Night Football simulcast hosted by none other than Peyton and Eli Manning.

The program that’s been dubbed “The Manningcast” has been the source of some of the most entertaining moments football fans have been treated to while tuning into games this year, and it’s safe to say ESPN struck gold thanks to its decision to recruit the Manning Bros to helm what has turned out to be an incredibly successful experiment.

I think a lot of people would agree the most unexpected aspect of The Manningcast is just how damn funny Eli and Peyton managed to be on a regular basis, and there are now a couple of guys who’ve (jokingly) come forward in search of some credit for their second act.

Earlier this week, longtime The Simpsons staffers Matt Selman and Brian Kelley joined Adam Schefter on his weekly podcast and tried to steal some of the Mannings’ comedy valor by suggesting The Simpsons was responsible for giving the two NFLers (along with their brother Cooper) their big break when they appeared as themselves on an episode of the show that aired in 2009.

Who knew @TheSimpsons helped launched the comedy careeers of the Manning Brothers?

The upcoming Jan. 2 edition of The Simpsons at 9 ET on FOX includes another sports cameo… https://t.co/ytnSQN6Ngu pic.twitter.com/UZUBHBiSfo

Selman: “I think we started the Mannings’ comedy career when they were all on The Simpsons. Because now they are like these funny goofballs commenting on games on ESPN2 and everyone’s having fun and joking around. They did that on our show ten years ago.

Kelley: “They hadn’t heard of comedy before us. They didn’t know it existed.

They were just these soulless machines that just threw footballs perfectly. We introduced them to the whole idea of joking around and having fun with the game. They’re really funny.”

Of course, most comedy fans likely know Peyton had previously shown off his impressive chops when he hosted Saturday Night Live in 2007 for an episode that spawned a couple of classic sketches (Eli also got in on the action in 2012).

It’s nice to see they’ve still got it.