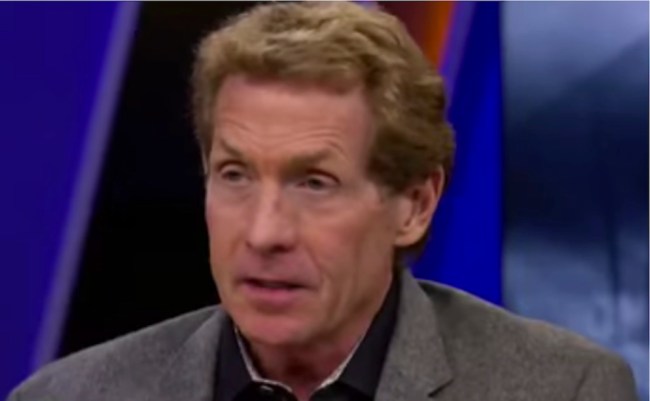 Skip Bayless is one of the many talking heads in sports media who can be heard shouting with any- and everyone who might cross his path about trending topics. In fact, the longtime sports journalist may have been one of the OGs for the job description during this social media, 24/7 sports news cycle, making him either beloved or hated by many viewers.

Sure, Skip Bayless may have moved from ESPN to FOX Sports in 2015 by inking a massive, $22 million deal with a $4 million signing bonus. But just because the guy is a) paid a hell of a lot to talk sports and b) comes across as confident in his debates, Bayless opened up about a past that didn’t seem as envious. In fact, in a Facebook post yesterday — a day after his 67th birthday — Skip opened up about his abusive childhood, letting fans into a world that most people wouldn’t have ever known about otherwise.

Growing up in Oklahoma, Skip Bayless’ candid Facebook post describes a childhood that no kid should have to endure. From saying he was ‘“raised” by an evil creep of an alcoholic father and a self-absorbed mother,” to describing how, finally, at age 14, Skip stood up to his dad for the years of physical abuse, threatening to hit his dad back, telling him, “if he ever hit me again, I was going to hit back. He knew I meant it. I was big for my age,” Bayless paints a childhood that is devastating and disturbing.

One of the more interesting things that Skip Bayless talked about in his Facebook post was his growing up in a household that never supported him, which he related to male athletes these days who said they grew up without a father, or had a mother working multiple jobs to support him.

“Now, when I read about an athlete who grew up without a father, I wish I had. Now, when I read about the single mother who loved her future-star son so much she worked three jobs while playing mother and father, I wish I’d had that mother. Not once did either parent ever ask how I was doing in sports or school or tell me they loved me. I was amused by the recent social-media controversy over how Tom Brady encouraged his son to kiss him on the mouth. I couldn’t have imagined either of my parents ever kissing me period.”

The entire piece that Skip Bayless wrote is a reminder that, no matter the success someone has, he or she always has their own internal demons, and are often fighting those memories every single day. For that reason, Bayless deserve kudos for talking about an issue that’s so prevalent these days in all men, mental health issues — which is something big-time athletes like Kevin Love and DeMar DeRozan have detailed in the past as well.

Bayless’ Facebook post can be read in its entirety here, and, if you have time and want to get to know the guy on a much more personal level, I’d recommend reading it. It truly is the epitome of the famous quote from the book To Kill a Mockingbird, where Atticus Finch says, “you never really know a man until you stand in his shoes and walk around in them.”

Respect to Skip Bayless for writing this, because, even if he’s overcome all the struggles, it was still a bold and brave move to put it out there for everyone to read.