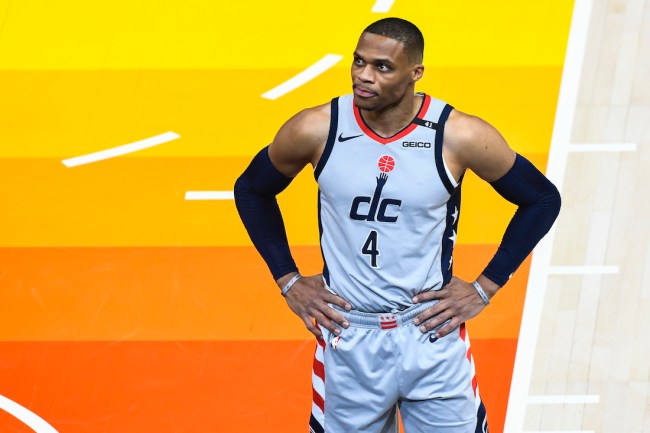 Considering some (not all) sports fans have been acting like complete morons since they’ve been allowed back into stadiums and arenas, there’s a lot of conversation about some of the abuse athletes have had to endure lately. From Russell Westbrook getting popcorn dumped on him during a playoff game to Trae Young getting spit on while in Madison Square Garden, some fans think it’s their right to go above the call of duty to hate on opposing players.

For those who need a reminder: It’s not.

Just because sports fans pay hundreds or thousands of dollars to watch a game from an arena or stadium doesn’t mean they can do as they please. It has consequences. It is disrespectful. And it’s embarrassing to everyone — including the team the fan supports, who typically has to release a statement for damage control.

So should fans be issued a harsher punishment if they get caught being idiots? Should they be arrested? Should their team be fined? All of those are possibilities — among other things — but one radio host, Brandon Tierney, actually has a more contrarian suggestion: Give the abused athlete 30 seconds of no holds barred with the fan.

Talking hon his radio show with co-hose Tiki Barber, Tierney addressed the situations that happened on Wednesday night to Westbrook and Trae Young, and gave a real heater of an idea to try and prevent more sports fans from acting like fools.

No joke, I love this idea from Brandon Tierney. Problem is, it obviously will never happen due to so many issues — like possible injuries to a star athlete. Still, as Russell Westbrook acknowledged after disrespectfully getting popcorn dumped on his head, things would be different if something like that happened on the street, where athletes wouldn’t have to be held back from going into the crowd.

We all remember “The Malice at the Palace” in 2004 when players went into the stands to attack fans. It was one of the ugliest days in sports, leading to fines and ruined reputations. Nobody wants to see something like that happen again.

And while Tierney’s suggestion of having athletes getting 30 seconds with sports fans acting like morons is a great thought, it’s also a dangerous idea to float out there — because, point blank, it sort of endorses more violence.

After over a year of being forced to watch sporting events from home because of a pandemic we’re still in the midst of, here’s to hoping sports fans clean it up and stop acting like entitled pricks. Not all of them are doing so, but a few bad apples are. That’s got to change so not to ruin the experience of watching a game from a stadium or arena for so many other people.