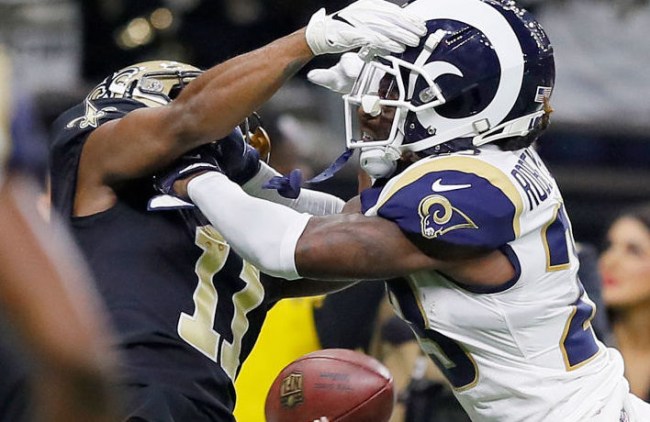 The Superdome and its now-infamous Whistle Monster were bringing the noise all afternoon during Sunday’s NFC Conference Championship Game and Saints fans made life difficult for the Rams thanks to their ability to scream loudly for long periods of time.

However, no one got to experience the wrath of the New Orleans faithful more than the members of the crew officiating the game, who were presumably shoved into bulletproof SUVs and ushered out of the stadium through a secret tunnel after the no-call to end all no-calls cost them the game.

The NFL was quick to admit a mistake had been made as members of the Rams gleefully mocked their opponents after being gifted a Super Bowl berth, and while Roger Goodell could reverse the outcome if he wanted to, the only real recourse the Saints will have is bitching and moaning for all of eternity.

THIS JUST IN: On the Pontchartrain Causeway… pic.twitter.com/32LNrYw28b

Of course, let’s not forget who the real victims are here: the people who got boned out of the money they bet on the game after the refs handed it to the Rams.

If Rams go on to win, that non-call is worth tens of millions of dollars.

The Saints were three-point favorites heading into the contest, and if the correct call had been made, there’s virtually no chance anyone who’d taken the spread or bet on them would have lost money on the game.

Based on my experience, sportsbooks aren’t particularly sympathetic when they make money off of you. However, it looks like at least one of them has a conscience.

According to USA Today, New Jersey-based PointsBet is offering to refund anyone who put money on the Saints to win or cover as a result of the blown call:

PointsBet said Monday it will refund spread and money-line bets on the Saints, who lost the game after officials failed to call a penalty on a Los Angeles Rams defender who leveled a New Orleans receiver long before the ball arrived.

It’s nice to know there are still some good people in this world.