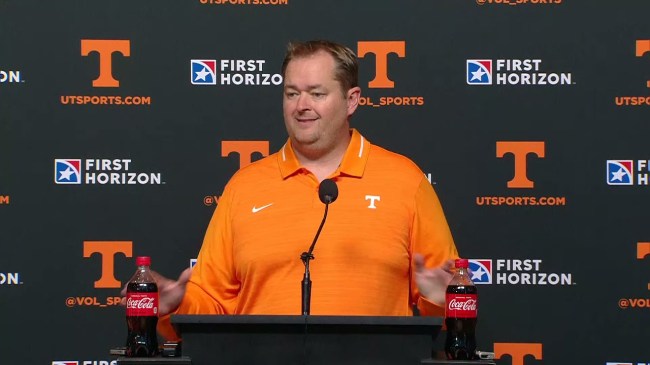 When you take over a program that’s coming off of a 3-7 season like the Tennessee Volunteers, you have to look for small wins everywhere, and that appears to be exactly what head football coach Josh Heupel is doing.

Heupel, who takes over the Vols after a successful stint at UCF, addressed the media on Monday and made one remark that stood out above the rest. He’s excited about how his players have approached walking up the stairs and attending meetings. Seriously, he said that.

For context, here’s the full quote from the press conference: “I love this team’s effort and energy, the way they’ve learned how to approach walking up the stairs and going to meetings and being consistent in those competitive behaviors that you’ve got to have.”

Who knew walking upstairs qualified as a ‘competitive behavior?’ Look out, world, the Vols are attacking stairs before attending meetings, they could turn some heads this football season. It sure feels like ’98 to me.

In all seriousness, Heupel is just trying to say that he appreciates his team’s approach, it sounds like the Vols have bought into Heupel’s mindset, which apparently includes walking up the stairs in a certain manner.