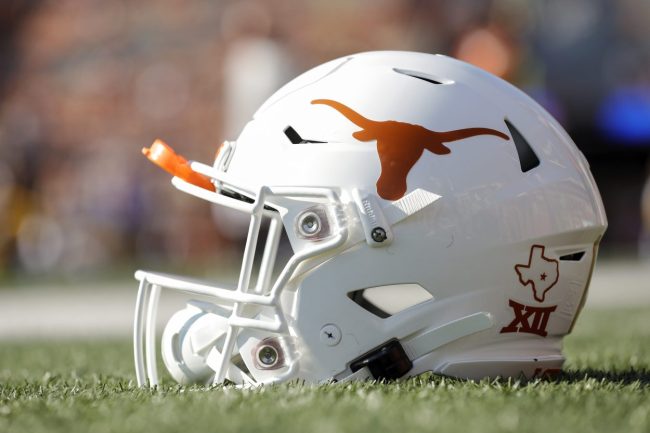 Cameron Williams is an absolutely massive human being. Depending on where you look, the high school senior is listed at 6-foot-5 or 6-foot-7 and anywhere from 320 to 360 pounds.

He almost certainly leans more toward the larger side. He is a very sizable 17 or 18-year old.

Williams, who plays for Texas high school powerhouse Stephenville, is a three-star prospect with huge upside. He committed to the University of Texas earlier this week and will be a part of the Longhorns’ plans at offensive line moving forward.

It’s not hard to see why. Look at him straight up eating defenders’ lunch in the state semifinal last week.

It’s a man amongst boys out there. Just not fair.

To get a sense of just how large Williams is, take a look at this photo. He posed in a Longhorns uniform on the field in Austin during one of his recruiting trips and took a unique approach to holding his helmet.

Instead of picking it up by the facemask, Williams decided that he would just “palm” the helmet instead. He picked it up by the top of the helmet and held it out in front of him as if it didn’t have a circumference of around 25 inches.

It’s like a normal-sized person picking up a cantaloupe, or for some people, a grapefruit. Except the cantaloupe/grapefruit is a giant football helmet.

His nickname is ‘Big Cam’ for a reason.

Williams is part of a No. 5-ranked recruiting class for the Longhorns. He is not the highest-ranked, but certainly the biggest of six offensive linemen to sign with Texas to play under Steve Sarkisian.

By playing under scholarship at Texas, each offensive lineman will receive $50,000 in deals for their Name, Image and Likeness. It has caused quite the conversation around NIL, but the deals were being made under the table before it became legal in July anyway.

Regardless of how much money he is making at Texas, Williams’ size is truly astounding and his presence could prove invaluable. Big Uglies lead the way!