The Rest of the Poirier vs. McGregor 3 Card: ‘Wonderboy’ Thompson, ‘Sugar’ O’Malley, and the Supporting Cast of the UFC 264 Undercard 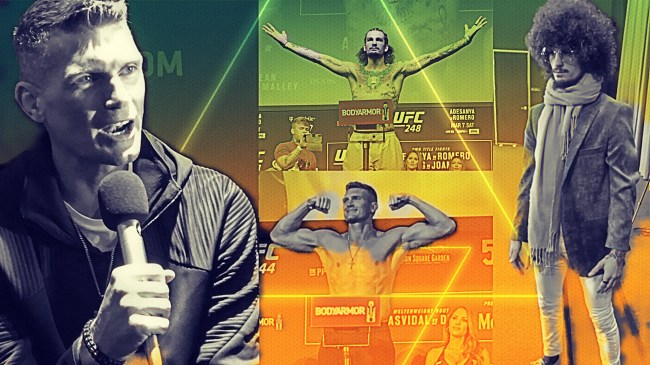 Here’s the truth. Ninety-nine percent of the viewers tuning in to UFC 264 on Saturday (July 10, 7 p.m. PST / 10 p.m. EST on ESPN+) are solely in it for the trilogy bout between “The Notorious” Conor McGregor and Dustin “The Diamond” Poirier. Who can blame them? It’s a very fine fight.

While McGregor and Poirier will no doubt deliver exceptional fits and feats of violence and athletics inside the Octagon, Conor and Dustin will be supported by a pretty spectacular cast of MMA mainstays at UFC 264, with names like Stephen “Wonderboy” Thompson and “Sugar” Sean O’Malley adding some of that big fight feel to the rest of the undercard.

So, while we’ve spent the majority of this UFC 264 preview series dissecting the Poirier vs. McGregor PPV main event from a number of angles, it’s time to give some love to Thompson, O’Malley, and a handful of fighters most of you have never heard of.

Read on for more on the rest of the UFC 264: Poirier vs. McGregor 3 fight card.

Does A Title Shot Hang in the Balance for Wonderboy?

If you’re a UFC diehard, then you’re plenty familiar with two-time title challenger Stephen “Wonderboy” Thompson. But if you’re new to MMA and the UFC, just imagine that Thompson is the closest thing to a real life Karate Kid.

One of the most spectacular strikers, and kickers, in the UFC, “Wonderboy” has delivered a number of incredible highlight reel finishes. Currently ranked fourth in the welterweight division, Thompson owns notable wins over Jorge Masvidal, Rory MacDonald, Johny Hendricks, Robert Whittaker, and Geoff Neal, but a win at UFC 264 may be the biggest of his career, as it could potentially land “Wonderboy” yet another title shot.

Standing in his way is Jiu Jitsu ace, and recent welterweight title challenger, Gilbert Burns, who is basically fighting to keep his spot as the second ranked challenger in the division.

Of course, a title shot is never guaranteed, but this is exactly the type of fighter where Thompson thrives. Because of his height and length, he’ll be able to stifle Burns’ attacks and keep the Brazilian on the outside.

Honestly, I don’t even expect this one to be close. The only question is whether or not Thompson can find his opening to flatline Burns, or if he’ll need the full 15 minutes of action to put on a striking masterclass.

What Does UFC 264 Even Mean for Sean O’Malley’s Career?

It’s no big secret that the UFC really likes “Sugar” Sean O’Malley. But I often wonder how they’re building this future star.

With his instant breakout success on Dana White’s Tuesday Night Contender Series, O’Malley was already fighting on UFC PPV main cards by his second fight with the promotion. And, after two years off to deal with injuries and a potential doping violation from USADA, “Sugar” returned to the Octagon March 2020, just before the pandemic, delivering a pair of highlight reel knockouts.

By June 2020, O’Malley seemed to be on the fast track to a title shot at bantamweight, but that all came crashing to a halt when he was finished with strikes by Marlon “Chito” Vera at UFC 252.

While O’Malley refuses to admit defeat — he arrived at UFC 264 fight week wearing a pink custom basketball jersey emblazoned with 13-0 to reflect his pro MMA record, minus the loss to Vera — he’s taken a step back to from the title picture to take a few tuneup fights. First finishing Thomas Almeida via KO at UFC 260, O’Malley was then booked to face former flyweight Louis Smolka, who has bounced in and out of the UFC for years.

The fight was a clear indication that UFC matchmakers want to build O’Malley’s record some more and give him the space to add to his highlight reel; however, with Smolka dropping out of the fight due to injury, the UFC next chose to bring journeyman Kris Moutinho up to the big leagues to face “Sugar.”

It’s not as if an O’Malley KO is a guarantee, but I’m buying what “Sugar” is selling here.

And, while a win over Moutinho realistically doesn’t do much to move O’Malley up the rankings, a spectacular knockout at UFC 264 will be the perfect recipe to keep building this star-in-the-making into a proper title challenger.

Have You Seen These UFC 264 Prelims?

From a competitive and action perspective, the UFC 264 prelims (5 p.m. PST / 8 p.m. EST on ESPN+ & ESPN) are totally wild and the perfect lead-in for what is allegedly trending as one of the biggest selling PPV fight cards in UFC history.

Topping the prelims are former interim welterweight title challenger Carlos “The Natural Born Killer” Condit, who is looking to continue his late career resurgence, and Max “Pain” Griffin, a UFC vet with finishing skills in all areas of MMA. It’s not exactly the sexiest fight, but this bout definitely has the potential to get nasty and bloody in a hurry.

There’s also an all-action matchup between Niko Price and Michel Pereira. If you haven’t seen these two fight before, this bout is definitely worth watching, not only for Pereira’s high flying antics, but also for Price’s knack for spectacular and breathtaking feats of violence and creative finishing abilities.

And then there’s former The Ultimate Fighter winner Ryan Hall, a Brazilian Jiu Jitsu and leg lock savant, who returns to the Octagon for the first time in two years to take on rising prospect Ilia Topuria, a BJJ black belt who has looked like a complete savage since joining the UFC in 2020.

Inactivity has been an unfortunate byproduct of success for Hall, who has been evaded and avoided by his colleagues, many of whom fear his precision and mastery on the ground. So, it’s sort of a big deal to have Hall back in action, giving this undercard some added boost.

UFC fight cards are built in a variety of ways. On occasion, matchmakers will stack entire cards with ranked fighters all the way down the prelims; however, building a card for a Conor McGregor event is a bit of a different task, especially since “The Notorious” essentially barred champions from sharing the marquee in an effort to maximize his Pay Per View payout.

Looking at the UFC 264 fight card, this is the best supporting cast McGregor has had since beating Eddie Alvarez for the lightweight title at UFC 205. And, while many of these names won’t lead to added PPV buys, these fights will deliver action and highlights.

What else could you ask for?