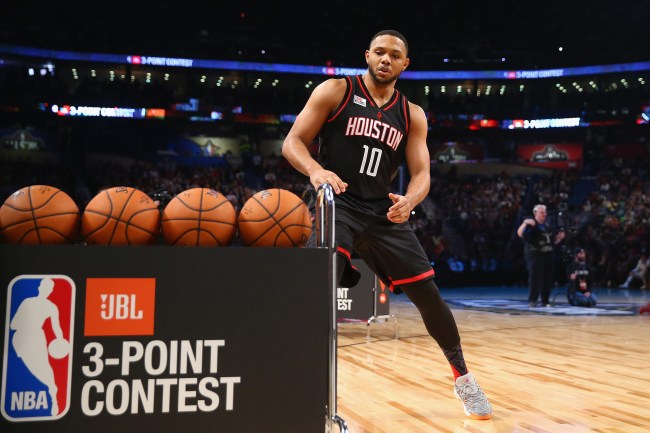 The NBA’s Three-Point Contest is one of the coolest events of the league’s All-Star Weekend — which, somehow, is already happening in a couple of weeks, February 15-16 in Chicago — as it shows off the lethal shooting skills of some of the best in the game. And, just like Tom Glavine and Greg Maddux once said in reference to hitting baseballs, “chicks dig the long ball,” so there’s always plenty of intrigue when these sharpshooters step on the floor.

In the past, though, the Three-Point Contest had a maximum score of 30 points, with five balls sitting on five racks, with the first four balls counting for one point, and the fifth (the money ball) counting as two points, with each participant having 60 seconds to get through each round. But at the 2020 NBA All-Star Weekend, things will look a little more interesting when fans tune in — and it’s a pretty awesome facelift for the league.

According to Tim Reynolds of the Associated Press’ Twitter account, the league’s new format for the contest is expanding a bit, both in distance and timing. Here’s what Reynolds had to report today about the updated look fans should expect.

The NBA is changing the format of the 3-point contest at All-Star weekend, AP is told.

The new twist: two new shots from 6 feet behind the 3-point line and they'll be worth three points each. Rounds will now be 27 shots instead of 25, taking 70 seconds instead of 60.

Given the popularity of players like Damian Lillard, Trey Young and others pulling up from 30-plus feet, this is a pretty awesome concept for the league to try out. I mean, it’s a terribly low-percentage shot in an actual game, yet, somehow, guys like Dame and Young make it look easy by sinking them with ease. This is a way for fans to see them try it for a little extra points in a fun shooting display like the Three-Point Contest — which always brings some bragging rights for the winner.

This year’s participants include the below, so we’ll have to wait and see who reigns supreme when it comes to draining treys.

Personally, I don’t care who wins, just as long as we have someone who’s cocky enough to pull a Larry Bird and celebrate before the ball tickles the net; like the Boston Celtics legend did back during the 1988 Three-Point Contest, which is a video that lives in infamy.

So who’s got the chops to prove he’s the best shooter in the NBA? We’ll have to find out in a couple weeks — and the league just made it more interesting for fans to watch thanks to the added distance.