Tiger Woods Hopeful To Play In Masters, Says ‘He Has To Get There First’ In Latest Update 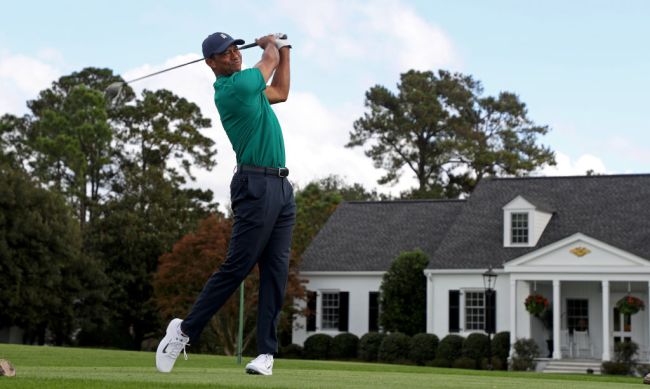 Tiger Woods announced in January that he had recently undergone back surgery, his fifth since 2014, and that he would miss a handful of upcoming events with the Masters in April circled on the calendar as a possible 2021 debut.

Following Woods’ initial announcement, Notah Begay and Rory McIlroy later revealed that Woods had his procedure done on December 23, was “back on his feet the next day,” and hitting golf balls in late-January.

Woods joined Jim Nantz on the broadcast during the final round of the Genesis Invitational on Sunday and gave an update regarding his health. He did admit he was a bit stiff, and that he was still rehabbing the back with “mundane stuff.”

“Still in the gym, still doing the mundane stuff you have to do for rehab, the little things before you start gravitating to something more,” Woods explained.

Nantz also asked Woods whether or not we’d be seeing him at Augusta in seven weeks time. While Woods has always been one to keep things extremely close to the vest, his answer wasn’t necessarily the most optimistic or promising one.

“God I hope so. I’ve got to get there first,” Woods said. “A lot of it is based on my surgeons and doctors and therapist and making sure I do it correctly. This is the only back I’ve got, I don’t have much more wiggle room left.”

Tiger looks and sounds worn out. This is just a 30 second clip, and he’s always kept things close to the vest, but not exactly the most optimistic answers here when asked about being ready to go for Augusta. pic.twitter.com/3pMPKzG8pB

Based on these comments alone, Woods may not have a legitimate timetable in mind as to when he may tee it up again on Tour.

Woods played in just nine official events in 2020 recording one Top 10 finish, which was a tie for ninth at the Farmers Insurance Open.