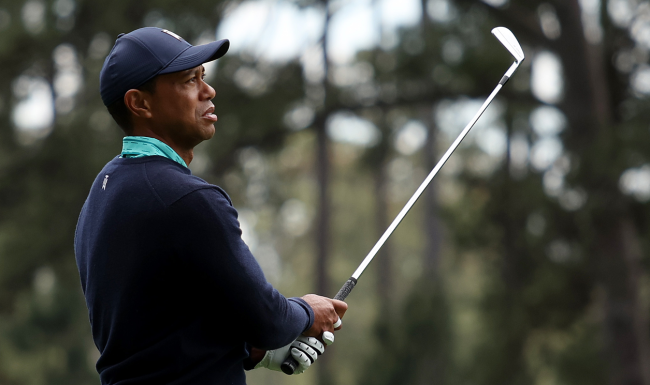 When Tiger Woods showed up in Tulsa last week to play a practice round at the site of the 2022 PGA Championship that’s being held later this month everyone was very excited.

While the Tulsa area was so hyped to have Tiger Woods playing a practice round at Southern Hills a local news station sent out a helicopter to watch him play, one Twitter account with a conspicuous history decided that it was unfair.

The Twitter account, GolfFACTS, long rumored to be associated with another PGA Tour player’s family, wrote, “I wonder what it’s like to have the Director of Golf at Southern Hills give you ALL the course notes you need for the upcoming @PGAChampionship. Do all players get this treatment @PGA? For @TigerWoods this is just embarrassing that @PGA posted this photo & it’s very telling.”

I wonder what it’s like to have the Director of Golf at Southern Hills give you ALL the course notes you need for the upcoming @PGAChampionship Do all players get this treatment @PGA? For @TigerWoods this is just embarrassing that @PGA posted this photo & it’s very telling. pic.twitter.com/TAf3siYsHO

In the photos being questioned, Cary Cozby, the director of golf at Southern Hills Country Club, is seen caddying for Woods during his practice round and offering some insight.

Many on Twitter couldn’t understand why Woods and the PGA would be criticized for playing a practice round, especially since Tiger was out of action for so long prior to his re-emergence at this years Masters. That is, unless that Twitter account does belong to someone in another PGA Tour player’s camp.

Dude it's not the nuclear codes. Any player can get tips from anybody else. Tiger often takes young guys around Augusta in practice rounds to show them where to hit it. Relax. https://t.co/V77KGhL6hK

One of the perks of being Director of Golf at a major venue is meeting Tour Pros, playing with the pros and sharing course info. Like this isn’t new? Same goes for the head pro.

Those who do not utilize the resources available to them are no better than those who have no resources at all. If you’re @TigerWoods and have this resource at your disposal…why would you NOT use it? #worksmarternotharder

Yes. Every pro gets this if they call ahead. This is ridiculous.

As for the round itself, Cozby spoke to SiriusXM PGA Tour Radio about it.

Southern Hills Professional Cary Cozby caddied for Tiger Woods yesterday. He described the wild scene to Michael Breed on A New Breed of Golf.@MichaelBreed I @TigerWoods I @PGAChampionship pic.twitter.com/uyOJVO4Ysc

“It’s amazing what he has to deal with on a daily basis,” Cozby said. “He came through the gate. He didn’t even come to the clubhouse because he knew what he’d have to deal with and went straight to the range. They sent a text said, ‘Hey, we’re on the practice tee. I’ll meet you on the first tee.’ And of course our clubhouse is open so we probably had 20 people, the patio, the golf shop’s right off the first tee. So there were probably 20 members that slipped out there to watch him. He didn’t look up, hit his shot. Second hole, there’s a helicopter. Fourth hole, there’s 50 to 70 people up on the hill overlooking that hole. And by the time we get to six there’s 30 to 40 people in the trees across the street with television cameras and phones and pictures, and [saying] ‘We love you, Tiger. Go get ’em, Tiger. Great shot, Tiger.’ Just amazing.”