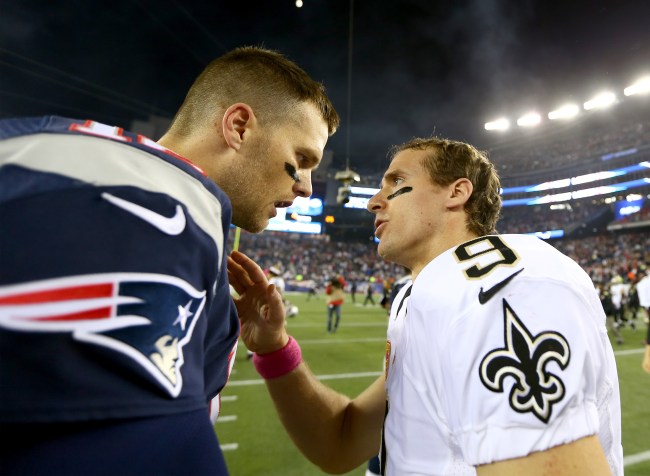 Tom Brady’s free agency this offseason was the hottest story in sports, with the six-time Super Bowl winning quarterback ultimately signing with the Tampa Bay Buccaneers after bolting from the New England Patriots. As if that move wasn’t shocking enough, Brady then got his buddy Rob Gronkowski to come out of retirement and work a trade from the Pats to the Bucs, reuniting the two future Hall of Famers on a Tampa team expected to compete for a Super Bowl this upcoming season.

However, had one simple decision be made by another one of Tom Brady’s counterparts, Drew Brees, the GOAT may have just ended up on another NFC South team: The New Orleans Saints.

While most of the recent talk surrounding Brees is about the controversial comments he made while discussing NFL players kneeling during the National Anthem, not long ago, there was some chatter that he was thinking about retiring after last season. In fact, Brees even admitted that it wasn’t until the Pro Bowl in late-January that he changed his mind about wanting to play again, and he, ultimately, re-upped with the Saints for two seasons.

So who would’ve been waiting to replace Brees under center? According to Jason La Canfora of CBS Sports, it could’ve very well been Tom Brady. Take a look at what La Canfora tweeted the other day about what he was hearing a few months ago about that very possibility.

Strange little quirk to this Drew Brees saga … Had Brees retired, as he long opined about and strongly considered, I'm told Tom Brady had very serious interest in the Saints and vice versa. Brady was waiting and watching that closely. Would have been a very real possibility.

This is interesting for a couple of reasons.

Obviously, none of this happened and both Brady and Brees will now be competing with one another for a chance at the NFC South title, and possibly more. But could you imagine being a Saints fan and being bummed had Drew Brees retired a couple of months ago, only to be on cloud nine had the team then signed Brady to replace him? Talk about some serious luck.

Whenever Brees does decide to retire — which is something at least one prominent TV analyst suggests should be sooner rather than later — it’s reported that the quarterback already has a broadcast gig lined up. Just think, a couple months ago he could already be in that TV job, and the Saints could’ve possibly had Brady. What a wild world it truly is.