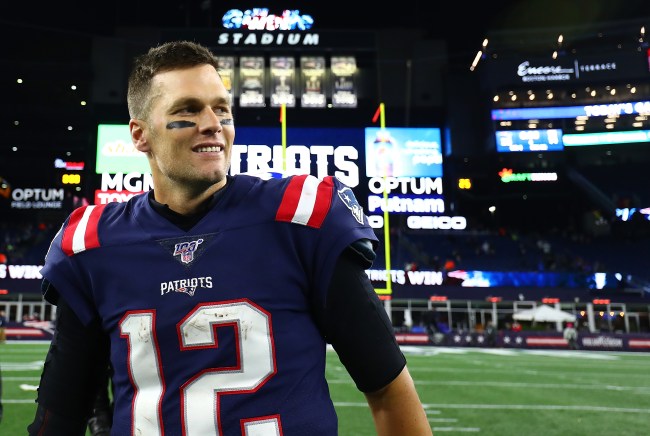 Tom Brady is wired just a little bit differently than most people. The six-time Super Bowl winning quarterback has kept himself in tip top shape for the past 20 years, showing that, even at age 42, he can still sling it with young guns in the league like Patrick Mahomes and Deshaun Watson. And, while Brady has never had the agility or athleticism of those guys, the fact that he’s still a top quarterback in the league at his age is a testament to how hard he works — as well as knowing his body better than anyone else.

As most of us know, Tom Brady follows a strict regimen called the TB12 Method, which he’s detailed in the past about just how intense it really is. Eating only the freshest organic vegetables, whole grains and lean meats, what the GOAT puts into his body on a regular basis helps him get the most out of it on the football field. It has clearly worked for him, so who’s to question it, right?

While we’ve had insight as to what Tom Brady regularly eats to get through his day, CNBC, via TB12’s website, recently detailed the game-day routine and diet that the New England Patriots quarterback does. To say it’s strict would be an understatement.

Brady Starts His Game-Day At 6 a.m.

Brady says he typically starts game day at 6 a.m., and the first thing he does is load up on electrolytes and nutrients. “I wake up and drink 20 ounces of water with electrolytes,” Brady says

After that, he drinks his first shake, a high-fat, high-protein smoothie that has bananas, blueberries, nuts, seeds and plant-based protein.

He then lets his food digest for about two hours before he starts his daily 40-minute training session. During Brady’s workouts, he doesn’t use any weights, only resistance bands.

Mid-way through his workout, Brady will stop to drink more water with electrolytes. Brady says he aims to drink at least one-half of his body weight in ounces of water daily (he weighs about 225 pounds, so about 112 ounces).

At around 11:00 a.m, Brady wraps up his workout and immediately has his next shake, a recovery drink made from a scoop of plant-based protein powder and almond milk.

Then around noon, Brady has lunch, which consists of 80% vegetables, because vegetables are high in nutrients, fiber and enzymes — all critical for athletes to fuel their bodies.

The other 20% of Brady’s meal consists of animal-based protein, like fish. Brady says that while he’s not a vegan or a vegetarian, he doesn’t eat that much meat, especially before a game.

For the rest of the day, Brady will snack on things like almonds, cashews and energy squares from his company TB12 Sports, which are made with superfoods like cacao and goji berries. He’ll also have two to three more protein shakes, he says.

Brady Is All About Recovery After Games

On game-day, dinner is packed with plant-based foods. Sometimes he will also have a steaming cup of bone broth, he says. (Some research has linked bone broth, which is animal collagen, to faster healing of soft-tissue injuries and digestive health in athletes, while other research debunks those claims.)

Following the game, Brady always has a recovery shake.

As for supplements, Brady says he always takes a multivitamin because no one’s diet is “perfect” and you never know what you may have missed.

Hey, it takes more than just talent to become a future Hall of Fame athlete, right? It takes a combination of ability, emotional awareness, physical preparation, a little luck, opportunity and, in Tom Brady’s case, making sure he sticks to a game-day ritual that has helped him become the GOAT — so who’s to question anything about it?

While there have been rumors about what’s next for Tom Brady — with some thinking he’s already putting together an exit strategy following this current NFL season — here’s to hoping that, whenever he calls it quits, the dude goes off and gets fat somewhere. After eating the equivalent of tree leaves for two decades, the guy deserves to reward himself a little bit.