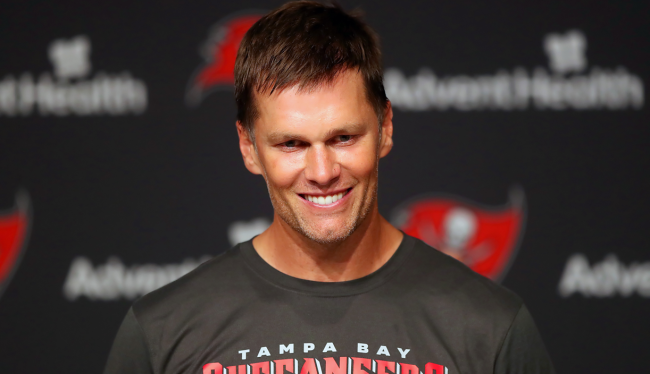 Tom Brady has given several reasons for why he decided, after announcing his retirement, to return and play a 23rd season in the NFL in 2022.

The future Hall of Famer has said that the timing of NFL free agency, the wishes of his family, the chance to win another Super Bowl ring, how the pandemic affected his perception of time, and the fact that he “felt some pressure” to play another year.

Of course, this is the same man who admitted that 90 percent of what he says in press conferences isn’t what he is really thinking, so who knows what the truth really is?

Especially when he just revealed yet another new reason for why he decided to forego retirement for at least one more year.

During an appearance on The Dan Patrick Show on Wednesday, Brady said, “Time went by and you just get super competitive. I think I’m part crazy, I think that’s the reality. I’m 45 years old and I’m out here with a lot of young guys that are trying to take my head off … But I have the appetite to compete and it’s gonna be gone soon, there’s no doubt about it, and I gotta just really appreciate the time I have left because it’s not a lot.”

Patrick then asked Brady about the eventual transition from playing in the NFL to working as a broadcaster for Fox.

“Just based on the fact that, look, I’ve been in every production meeting for 22 years since I started playing in 2001,” Brady said. “I know what those guys are asking, I know what they’re asked to do and I think it feels very much like a team that goes on the road to prepare for a game.

“So there’s a lot of learning curve, obviously, it going to be a totally new career,” he continued. “It’s a new opportunity for me to try something that I’m going to work really hard to prepare to be as good as I possibly can be, knowing that the day I walk on the set for the first time won’t be my finest moment. There’ll be a lot of growing pains, and I’ll have to learn to be really good at it.

“But I also think that there’s part of it that excites me. I get to travel and be around football and be around people that, you know, I’ve been around great mentors my whole football career … I’ve had so much experience and if I can help people along the way in my travels and talking to coaches and talking to players, you know, I love the sport of football and I get to be in it. That’s what mostly I got excited about.”