Tom Brady Talks About Why He Didn’t Retire, What Gisele Said When He Told Her 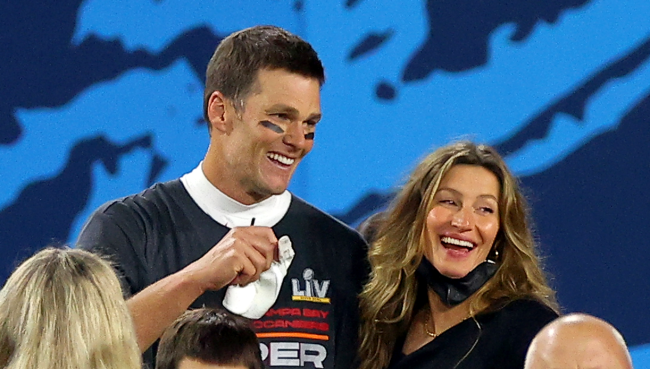 Oh, and he hasn’t missed a single game since 2016 when he was suspended for Deflategate. Take that out of the equation and Brady has played in 205 straight games, not counting the playoffs.

So when he announced back in February that he was going to retire (a) many fans were surprised, and (b) many fans also didn’t really believe him.

Turns out those latter fans were correct in their doubt when 40 days later Brady announced he was not retiring and would come back for a mind-boggling 23rd season.

In a new interview with Complex, Tom Brady talked about what went into his decision to un-retire and what his wife Gisele Bundchen said when he told her his intentions.

When asked why he ultimately decided to come back and play another season with the Buccaneers, Brady replied, “I wanted to make sure the team had time to plan. I didn’t want them to get too far down the line and then realize that I wasn’t gonna play. So I tried to let them know as early as possible when I felt like I was sure that I wasn’t gonna be able to make the commitment to play. I wanted to tell them that my life was gonna take me in a different direction. Having different conversations with Bruce [Arians] and Jason [Licht], there’s still an intense love of the sport. I think that will always be there. I really wanted to make sure this offseason, and I had told the team, that I really need to spend time with my family if I’m gonna come back and play and make this commitment to this team. I love the players. There’s no way in the world I’d be coming back to play with guys that I didn’t care deeply about.”

Brady continued, “Eventually, I had to make a decision just because they were getting into free agency. Would I have preferred to wait in the end to make sure I was really, really sure? Yeah. But that wasn’t the way the NFL calendar works. So I spoke to Jason right before free agency. And I spoke to Bruce. And they’re like, as much as we’d love for you to give you time, we don’t have time. At that point, I decided to talk with my family and I said, “I think I wanna do this one more time if you guys will support that.” And my wife was so supportive of it and she said, “Look, I want you to be happy. I want you to enjoy it and go out there and win.” Ultimately, that’s why I came back, to win. There’s only one reason to play for me at this point in my career. And that’s to win.”

Famously, Tom Brady once said he could probably play until he is 50 years-old. He was asked if he still believed that, and, more importantly if he actually wants to do it.

“There’s two answers to that. I do think I could play till 50,” he said. “But I don’t think I will just because I know the commitment that it takes. I know the commitment that it takes for me at 44 and 45. I worked out today and it’s a big commitment and I’m away from my 14-year-old son and my 12-year-old son and my nine-year-old daughter. And they deserve my time and energy and they’re getting older. I wanna be there for my son’s football games and lacrosse games and basketball games.”

Bottom line, at least for now, according to Brady, is that he is just “gonna enjoy this year.”

As for what happens next? He says, “I don’t know what’s gonna happen beyond this year. We’re not really promised anything.”

Read the entire interview with Tom Beady over at Complex.com.