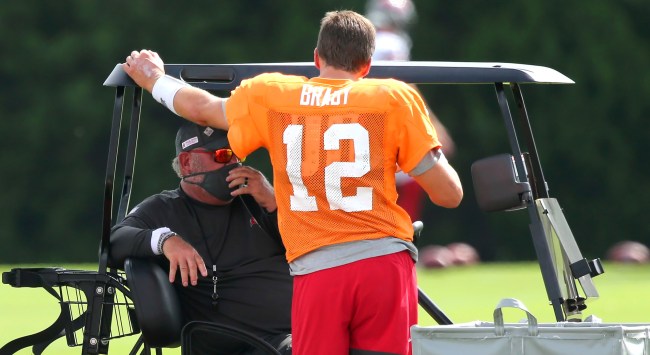 One of the more interesting developments to come out of Tom Brady’s departure from New England for the sunny skies of Tampa Bay has to be the fact that both Patriots coach Bill Belichick and current backup quarterback Brian Hoyer don’t appear to think losing TB12 is that big of a deal.

Two weeks ago when asked about not having Brady on the team this season, Belichick said, among other things, “It’s the National Football League. Every team has changes every year.”

Then this week, Hoyer, who is in his third stint with New England, also downplayed Brady being absent from the Patriots training camp for the first time in 20 years, saying, “No not really,” when asked if the offense looks any different now.

Perhaps not having Brady really isn’t that big of a deal in New England.

In fact, according to Boston Sports Journal’s Greg Bedard, some folks there are even happy that Brady is gone.

“I will admit to you that from what I’ve heard since Tom Brady departed, the Patriots did need a vibe change in the locker room because a dour Brady, which start to crop up at the end of 2018, took its toll on the Patriots last season,” Bedard wrote.

“It was so bad that some of his teammates have admittedly privately that it was better for all involved that Brady moved on if he was going to have the same attitude this season.”

According to numerous reports prior to and during the 2019 Patriots season, Brady did appear to be quite frustrated with the situation in New England.

At one point, Brady, his wife Gisele, and Patriots owner Robert Kraft even had multiple meetings to discuss how Belichick was supposedly mistreating the team’s franchise quarterback.

He also wasn’t very happy with the wide receiving corps the Patriots put together (rightfully so), as well as the salary he was receiving when compared to other quarterbacks (also justifiable), and even Gronk at one point last year complained about Brady’s negative attitude after victories.

As surprising as it may sound, maybe it is for the best that the future Hall of Famer has moved on to Tampa Bay.