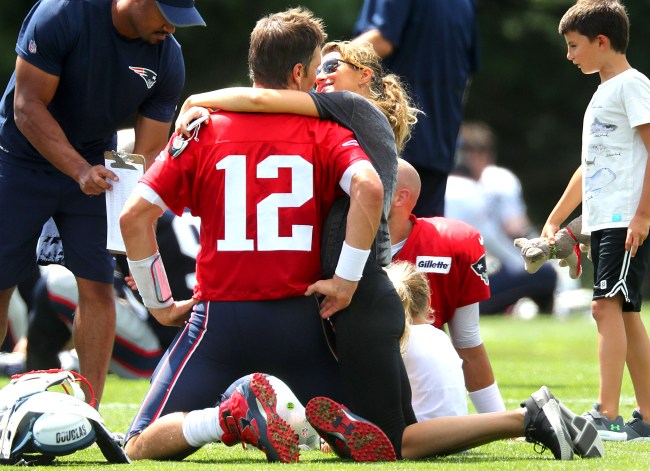 A new book by Jeff Benedict titled The Dynasty about the New England Patriots incredible run over the past two decades is starting to sound like a must-read.

Excerpts of the book that have been released in various publications have been nothing short of fascinating.

From just how gruesome Tom Brady’s thumb injury really was during the 2018 NFL playoffs to the text message Patriots owner Robert Kraft sent Brady when the quarterback decided to leave New England for the Tampa Bay Buccaneers, it would appear that The Dynasty will be an interesting read for just about any football fan.

Another excerpt that will have NFL fans tongues wagging involves a dust-up that occured between Brady, Bill Belichick, and Tom’s wife Gisele Bundchen.

Bundchen, as fans will remember, famously ripped New England’s wide receivers after the 18-0 Patriots lost to the Giants in Super Bowl XLVI by saying, “My husband can not f***ing throw the ball and catch the ball at the same time. I can’t believe they dropped the ball so many times.”

In another excerpt from The Dynasty published by NBC Sports Boston, Gisele is reported to also gone after Belichick following New England’s loss to the Philadelphia Eagles in Super Bowl LII over how she perceived The Hoodie was mistreating her husband.

Kraft’s paramount concern (after the Super Bowl) was the dynamic between Beichick and Brady. Belichick’s decision to banish (Brady’s body coach and TB12 business partner, Alex) Guerrero from the sideline and the team plane in the middle of the 2017 season had been a tipping point. Kraft knew that Belichick’s methods were grinding on Brady. He also knew that Belichick was tired of the exceptions that Kraft felt were necessary to accommodate a transcendent star. The differences of opinion between Brady and Belichick were more pronounced than ever. Kraft wanted to clear the air.

Kraft ushered them into his living room. Belichick took a seat on a chair to Kraft’s right and Brady sat on a couch to Kraft’s left. Hoping to facilitate some constructive dialogue, Kraft told them how important they both were to him. Belichick was diplomatic. Brady was respectful. But the distance between them was obvious.

Rumors around that time were swirling that Brady didn’t feel appreciated by the Patriots as he ditched training camp and was visibly upset when confronted with questions about his trainer Guerrero.

After Kraft, Belichick and Brady had their meeting, the Pats owner set up another one involving TB12 and his wife Gisele. That’s when she went off.

She also pointed out how ridiculous it was that after all these years, Belichick still treated Brady like “f***ing Johnny Foxboro.” It was bad enough to never voice approval. It was bullsh*t to still be dressing down the most accomplished quarterback in league history during team meetings and treating his personal trainer and best friend like some kind of outcast.

When the conversation shifted to the future, Brady and Bündchen indicated it was time for them to make some changes that were in the best interest of their family. Among other things, they were contemplating a change of scenery.

Kraft wasn’t surprised by their feelings toward Belichick. He hadn’t, however, expected to hear that Brady and Bündchen wanted to leave New England.

After yet another meeting in which Kraft told Brady and Bundchen he wasn’t going to let Tom go to another team and that he would ask Belichick to lighten up, “Brady and Bündchen left without saying anything more.”

After talking to his wife, Brady decided to stay with New England for two more years.

Rob Gronkowski, on the other hand, was told he’d been traded to the Detroit Lions. He refused, and told New England brass “Brady was the only quarterback he’d play with.”

And that’s how Tom Brady ended up playing in Tampa Bay with his good buddy Gronk.