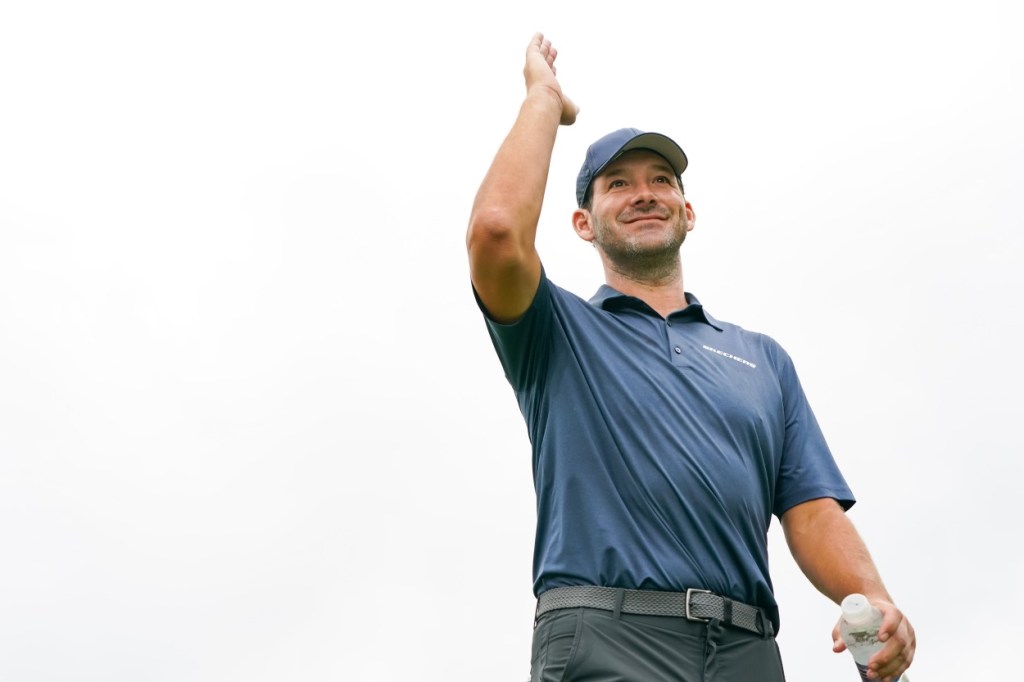 Former Dallas Cowboys quarterback and current CBS Sports analyst Tony Romo was in Wisconsin this week. Most sports fans already know this but Tony Romo is one heck of a golfer. His index has reportedly reached +1 at times.

Tony Romo also did all of that with a brutally sore back that was plaguing him so badly to the point that he had to get down on the green and do yoga while his opponent was putting. Watch this clip below and then try to imagine being the guy who is paired against Tony Romo in a match play and then the former Dallas Cowboys QB busts out into yoga stretches.

Here is Tony Romo in the bottom left of the screen doing yoga poses while his opponent misses a putt:

Despite Tony Romo’s back acting up, he wins this hole when Sam Cianciolo can’t make this par putt to halve the hole. Romo 1-up thru 14 per live scoring. @WSGAGolf #StateMatchPlay @Wisdotgolf pic.twitter.com/5Pv1jHDIW8

Aaaaand here’s Tony putting for the win on another hole:

This lag putt wins it for Burlington’s @tonyromo on 18 @WSGAGolf State Match Play as Sam Cianciola concedes the birdie putt for a 1-up win & 3-0 record. @Wisdotgolf pic.twitter.com/xmVDJnPxWk

Golfers and football fans weigh in on Tony’s yoga stretching…

I wouldn’t be able to keep a straight face in this situation and this is coming from someone who regularly does yoga.

Cheeky indeed but Tony Romo’s back was certainly hurting…

Seeing Tony Romo doing awkward stretches in public really is as relatable as it gets. This is me like 85% of the time I’m on the golf course which is several times a month.

Anyone with a jacked up lower back knows that Cat Pose stretch. Hurts like hell when you've got a herniated disc.

If you’ve never been called out by your significant other for stretching in public then I’ve got some bad news for you, you’re probably not cut out for #DadLife. It doesn’t have to be elaborate Cat and Cow yoga stretches like Tony Romo. Perhaps you just see a good door frame at a restaurant and use it to stretch out your shoulders and chest. Or maybe it’s a low bench that’s perfect for getting in a good calf stretch.

There are a million instances that could lead to you, I, and/or Tony Romo stretching in public. And if you’re the type of guy who isn’t seizing those opportunities then the Dad Force™ just isn’t strong within you. I’m sorry but those are the facts of life.

How Did Tony Romo Finish The Match Play Event?

Tony Romo won his first three matches and birdies were flying left and right. But either the tough course conditions or his bad back caught up to him and he fell short in his Round of 16 knockout match.

#16 seed Tony Romo lost to #1 seed Adam Miller 5 & 4 in their round of 16 matchup with Miller moving on to the final 8 and Romo heading home with a bad back. Ya hate to see it, nobody should have to get on a plane when their back is flaring up like that.