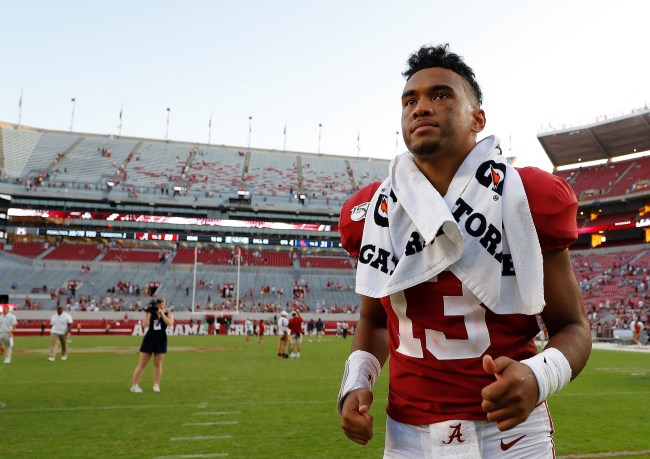 It’s hard to imagine what’s going on in the head of Tua Tagovailoa right now as he preps for the NFL Draft. Not only is the former Alabama Crimson Tide quarterback expected to be one of the first few players off the board when the draft’s held virtually now on April 23-25, but he’s also gone from can’t-miss prospect to the great unknown, with plenty of teams wondering about his injury history.

After suffering a devastating hip injury that derailed his season last year in Tuscaloosa, Tua Tagovailoa went from the presumed No. 1 overall pick in this year’s draft class to a guy with too many question marks. Instead of getting down on himself and feeling disrespected, the usually quiet Tua seems to be using it as self motivation, allowing all the doubts about him during this process to use as fuel for his fire.

Need proof? Just look at the hype video the quarterback teased on Twitter today showing how the tune of media people changed over the past year since his hip injury, and how many are counting him out now as he prepares for the NFL Draft.

Tua T, to a T… pic.twitter.com/Td1YYS8pMI

That’s some good shit, guys. Tua Tagovailoa knows he’s had a fall from grace in the past six months or so due to one thing, an injury. But he seems to be fighting like hell to show every NFL team that dare passes on him in the draft that he’s going to be armed and ready to show them why they’re wrong. Considering he was having a Heisman-worthy season prior to getting hurt, no one should think he doesn’t have the skills to follow through on that revenge.

Doctors who have check out Tagovailoa’s hip says he’s good to go, but because of the current pandemic, teams can’t have their own medical staff see how he’s progressed over the past few months. Instead of using that as a disadvantage, the young quarterback’s doing what he can to prove to teams he’s worth the risk — and a team like the New England Patriots could be one to keep an eye on taking that risk, which would be a wild story should this kid replace Tom Brady in Foxborough.