Tyler Glasnow’s Mom Was Not Happy With Him Dropping F-Bombs, Swearing Up A Storm On TV 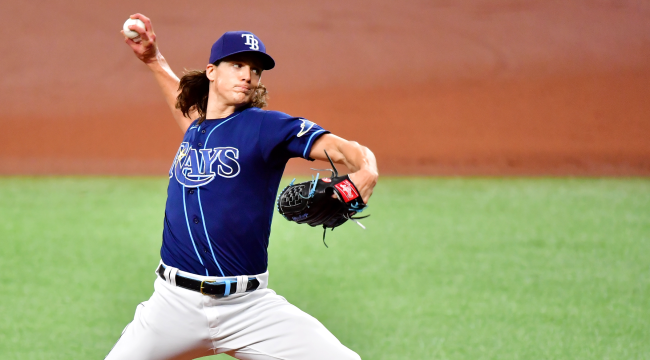 27-year-old Tyler Glasnow appears to finally be fulfilling all of the promise he has shown glimpses of in the past for the Tampa Bay Rays.

Drafted by the Pittsburgh Pirates in the 5th round of the 2011 MLB Draft, Glasnow currently sports a 3-1 record with a 1.67 ERA, striking out an eye-popping 56 batters in just 37.2 innings pitched.

On Wednesday, Glasnow shut out the Oakland A’s over 7 innings, notching 10 K’s in the Rays’ 2-0 win.

Related: Tyler Glasnow Used To Look At Pictures Of Martin Shkreli To Get Angry Before Taking The Mound

It could have turned out differently, however, had Rays center fielder Kevin Kiermaier not made an amazing catch during the top of the 7th.

Hell of a grab by Kevin Kiermaier. This pleases the Sex God. pic.twitter.com/fFujLQYqa1

What that clip doesn’t show is the string of expletives flowing out of Glasnow’s mouth as he looked on in awe of Kiermaier’s diving grab.

If you can read lips, even just a little bit, it’s pretty obvious Glasnow dropped a couple of F-bombs and at least one S-bomb there – something that did not make his mom Donna very happy at home.

After the game, Glasnow was talking to the media about the catch when he admitted that his mother had already gotten to him about it.

“My mom texted me like, ‘You’ve got to stop cussing on TV. Cover your mouth or something,’” said Glasnow. “But that’s my only reaction I can give him. It’s just unbelievable. Every time he does something, I’m like in shock every time. And he’s done that for me, since I got traded over, at least, I don’t know, like five, six, probably more than that, times, so every time he does it too, it’s just as shocking. So, it’s just like a genuine reaction.”

Got that, mom? It just happens. Let your boy be. He’s doing well!

After another question regarding a home run hit by his teammate Mike Zunino, Glasnow added, “Yeah, there’s always there’s some swear words going on when everything kind of goes well or someone does well, so I should work on covering my mouth, like my mom said, but yeah, good for them.”