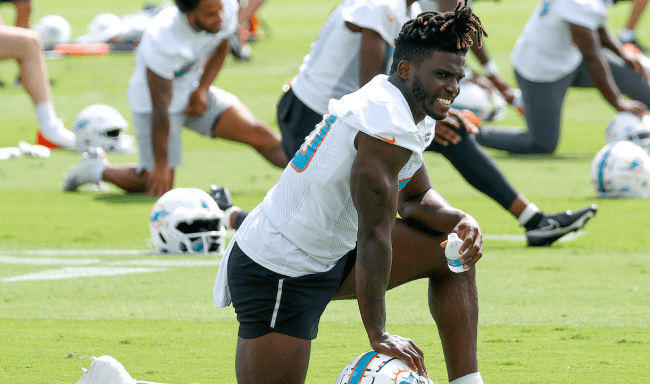 New Miami Dolphins wide receiver Tyreek Hill does not lack for confidence, nor is he shy about letting everyone know it.

Hill also isn’t afraid to drop some seriously hot (read: bizarre) takes about his new team and the players who are on the roster.

Hill even went so far as to imply that Tagovailoa is a more accurate passer than the 2018 NFL MVP and MVP of Super Bowl LIV.

Speaking of Super Bowl LIV, which the Hill and the Chiefs won 31–20 over the San Francisco 49ers, Tyreek claimed on his It Needed To Be Said podcast this week that the 2022 Miami Dolphins are “the exact same team” as the 2019 Super Bowl winning Chiefs.

“That 2019 offense with the Chiefs was stupid,” Hill said on the show. “When I go out to practice each and every day, like I said, I see the same exact team. I swear. As far explosive, as far as dynamic, we have the same weapons. Maybe even more.”

“When you add Mike McDaniel into calling plays, I know Andy Reid is great, but when you add [McDaniel] it’s crazy,” Hill continued. “The way he dials up plays and his play-calling timing, I don’t even know what to say, it’s just crazy.”

The 2021 Dolphins, minus Hill and some other new acquisitions, went 9-8 (good for third place in the AFC East) while averaging 20.1 points and 307 yards per game (good for 22nd and 25th in the NFL respectively).

Needless to say, NFL fans got quite a chuckle out of Tyreek Hill claiming the 2022 Dolphins are the “same team” as the 2019 Chiefs that won the Super Bowl.

I get the dude wants to amp his team up but literally no one outside of the Dolphins organization or fan base thinks this. Not a single person.

— Psychopath Who Doesn't Care About Anyone (@UpstateFlagLeag) July 12, 2022

Dude is trying so hard to convince himself lol

He gassin but that's what he is supposed to do. Dolphins won't even make the playoffs though. Very fun team on paper though. Madden gamers will love them.

Found it. I found the difference. Hope this helps him. pic.twitter.com/WHMXt8VEQL

Outside of the best TE in the game and one of the best to ever do it? Other than that Mrs. Lincoln, how was the play?