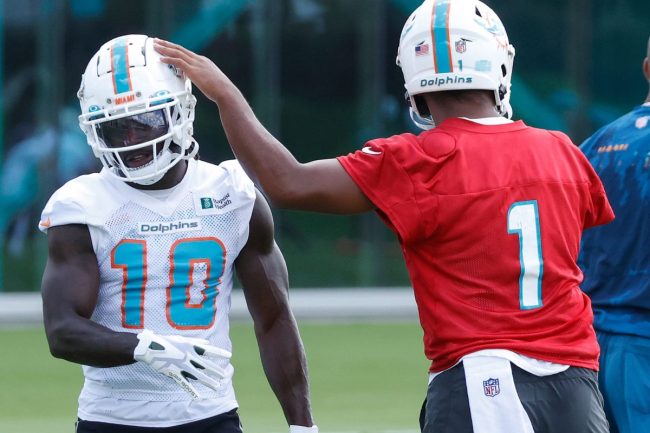 New Dolphins’ wide receiver Tyreek Hill is doubling down on his comments made about quarterback Tua Tagovailoa. Hill has praised his new teammate’s work ethic and on-field abilities throughout the offseason, which has led to a myriad of media headlines this summer.

He’s gone as far as to say he’s a better passer than Patrick Mahomes, and the most accurate signal caller in football.

On Monday morning, the pass catcher made an appearance on ESPN’s First Take to talk about the upcoming season. He was once again asked about his thought process over the offseason when debating what team he wanted to play for in 2022.

He had a choice that seemed to come down to the Jets and Dolphins. Specifically, Hill was asked about his preference for Tagovailoa over Zach Wilson.

Here’s what the wideout had to say.

“Zach Wilson is a dog, but I wanted to play with the most accurate quarterback in the NFL.”

He continued on, even slipping an f-bomb in on national television.

“Tua, he’s not your typical gunslinger, but if you really pay attention to his game, everything is spot on. Everything is pinpoint. The ball is on time. His fundamentals are on point… Tua, he’s a f-ing heck of a competitor. He’s a hell of a hard worker. So, like I said, I’m excited to go to work with him.”

After the interview, sports fans began talking on social media.

After hearing Tyreek Hill talk up Tua yet again, many fans took to Twitter to post their initial thoughts. Most don’t think Hill actually believes what he’s saying.

My man freestyled an entire lie about Tua that’s what’s up 😂 https://t.co/e1rLQJlmQI

Tyreek doesn't even believe his own lie. He cannot say it with a straight face. https://t.co/i6s6nUDwlb

Others think the real reason he picked the Dolphins over the Jets was the paycheck.

28 million a year make you say anything lmao 😂😂😂 https://t.co/cglwtduMM2

I would say that as well if a team made me the highest paid WR in the league https://t.co/V0OmrtjAS3

And they don’t know if Tagovailoa will be able to perform to the level that Hill is expecting.

We’ll see if Tua proves the doubters wrong in 2022 as he and Hill team up in hopes of leading the Dolphins to the postseason.