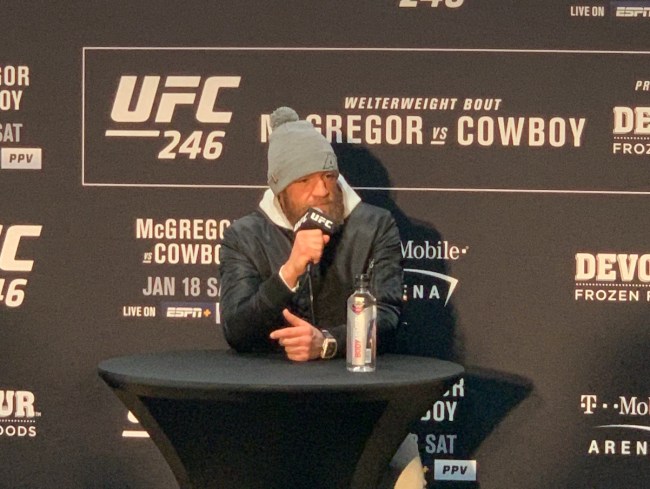 Conor McGregor is the most polarizing athlete in UFC history. He knows it. Fans know it. His opponents know it. And, because he’s as outspoken as they come, the Irishman makes sure he reminds people who might doubt that he holds that title anytime he gets a chance. Hell, why else do you think the 31-year-old could be in line for an incredible $80 million payout after his upcoming UFC 246 fight against Donald “Cowboy” Cerrone this Saturday, Jan. 18?

Making his first appearance in a UFC event since October 2018, Conor McGregor (21-4-0) vs. Donald Cerrone (36-13-0) is the fight everyone’s talking about leading up to UFC 246 — which is exclusively available on ESPN+ — and with good reason. It’s because, to be blunt, McGregor delivers the goods to fans.

McGregor is as mercurial an athlete as we’ve ever seen. He’s got a short fuse that’s gotten him in trouble both in and out of the Octagon. He’s brash, arrogant, rich and successful — and he makes sure everyone knows about it. And, while his antics might be a little much for some, when it comes to the UFC, it’s exactly the persona the organization loves.

Maybe that’s why these incredible stats about Conor McGregor leading up to UFC 246 shouldn’t be so surprising, as they show that, give MMA fans the wild animal that is Conor, and they come flocking.

Guys, that only means one thing: You need to get UFC 246 on ESPN+ to watch the one and only Conor McGregor — which can be all yours for just $84.98, with the price including the entire UFC 246 event and an annual subscription to the streaming service.

UFC 246 is pretty much all about the legacy of Conor McGregor, but there’s plenty of other juicy matchups to look forward to as well. And they’re all available on ESPN+ only, so this is the event sports fans will be talking about this weekend.

The event also features Holly Holm (12-5-0) — one of UFC’s all-time top women’s fighters — looking to takedown Raquel Pennington (10-7-0) in a Women’s Bantamweight fight in the co-main event. Add in the Lightweight fight between Anthony Pettis (22-9-0) vs. Carlos Diego Ferreira (16-2-0), and you’ve got one of the deepest fight cards ever! So don’t forget to snag your subscription to ESPN+ before UFC 246 gets started on Saturday, Jan. 18th, with early prelim fights starting at 6:30 p.m. EST.

Since no sports fan wants to miss out on UFC 246, here’s a look at all the matches that will be streaming on ESPN+ from the event — which can be all yours for only $84.98 — so make sure to grab some snacks and have your buddies over to take it all in.

For those mega UFC fans, remember that ESPN+ is the exclusive home for all the action inside the Octagon. So, if you’re already planning on watching UFC 246, you might as well score yourself all the dope content the streaming service offers. Here’s a quick glimpse at the programming on ESPN+ that you’ll get to watch all the hard-hitting action.

Remember, a yearly plan of ESPN+ with UFC 246 is only $84.98, so now’s the time to get yours so you never miss any of the top-notch UFC or sports content always available at your fingertips.