Here’s Why Pat Riley Could Cash In If Brooks Koepka ‘Three-Peats’ By Winning The U.S. Open 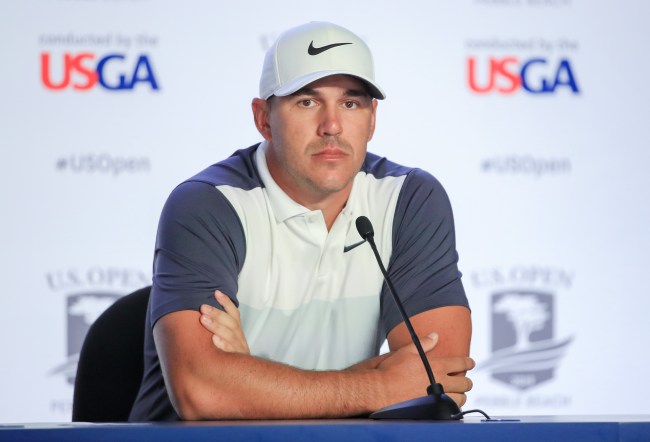 Golf’s U.S. Open is teeing off today from Pebble Beach, so, if you’re anything like I am, there’s a good chance you’re glued to your TV or computer taking in all the action. It’s said that the tournament is one of the most grueling to win on the PGA Tour, but golfer Brooks Koepka might disagree with that notion. That’s because the 29-year-old Koepka has won the past two U.S. Open titles, setting himself up for something that hasn’t happened since 1905 — a three-peat.

Yep, you read that right, guys, not since 1905 has a golfer won three-straight U.S. Open titles, with the last one being some dude named Willie Anderson. But, if Koepka joins Anderson in accomplishing the feat by the end of the weekend, there’s something the golfer needs to make sure he refuses to say or do — use the phrase “three-peat.”

For those unaware, Pat Riley actually trademarked the “three-peat” phrase all the way back in 1988 while coaching the Los Angeles Lakers, when the team was going for their third NBA title in a row; which, ultimately, didn’t happen. Still, because Riley trademarked the phrase, he’s cashed in on other sports teams using it — like the Chicago Bulls in the mid-90s, New York Yankees in the late-90s and the Lakers in the early-2000s, per the New York Post.

Riles & Co., a corporate entity of the former NBA coach and executive, owns the trademark to “Three-peat” and similar phrases for use on shirts, jackets and hats. Riley submitted the initial trademark application in 1988 when the Lakers were trying to achieve a third consecutive NBA title. Riley was the coach of the team then, but credited Byron Scott for coining the phrase as the slogan for the season.

While the Lakers ultimately did not win a third straight championship, the trademark was successfully registered in 1989.

So, what’s that all mean for Brooks Koepka should he earn a “three-peat” by winning the U.S. Open this weekend? It means he should find another way to say he’s won three in a row, because Pat Riley will definitely be coming to collect some money should he utter the words “three-peat.”

Dennis Hopkins, an intellectual property attorney based in New York, told The Post that Koepka should avoid marketing “Three-peat” without seeking approval, should he win at Pebble Beach. Koepka has an apparel agreement with Nike.

“It probably would not be advisable for anybody to sell hats, jackets or shirts with ‘Three-peat’ on it because there’s a company that already owns a registered mark that covers hats, jackets and shirts among other things,” said Hopkins, who has no connection to Koepka or the PGA Tour. “Maybe he can say, ‘I won three times’ or ‘I repeated it a third time.’ But if ‘Three-peat’ is used without permission, there’s likely to be litigation.”

Who knows if Pat Riley’s a golf fan or not, but, regardless of him watching the U.S. Open or not, he’s probably got a close eye on what Brooks Koepka does — and what he might say should he win the major championship this weekend.