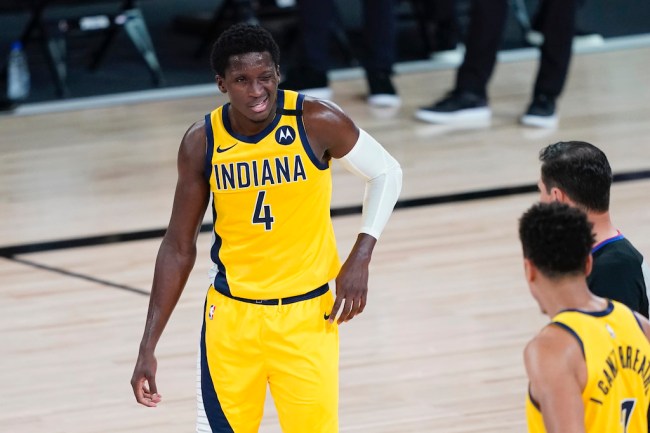 There’s tons of speculation surrounding Indiana Pacers All-Star Victor Oladipo this NBA offseason, with many thinking the former No. 2 overall pick has played his last game with the franchise. While that’s still up in the air and nobody knows for sure what the team does with their superstar, a recent report doesn’t make it sound as if Vic really wants to stick around.

According to Sporting News‘ social content producer Jordan Heck, Oladipo was actually pitching himself to opposing players and teams during games late last season, with the two-time All-Star reportedly being heard by some as asking if he could “come play with y’all”. This was all allegedly happening in front of his Pacers teammates, too.

Victor Oladipo asked other teams "Can I come play with y'all?" in front of his Pacers teammates, per @ThisIsJMichael pic.twitter.com/vcSyJVlhcB

So, uh, yeah, this isn’t really a good look for Victor Oladipo, who also played his college ball in the state of Indiana for the Indiana Hoosiers. Maybe the guy just needs a change of scenery and is looking for greener pastures after all those years in the state? Or maybe he’s just really upset with some of the moves that the franchise has made over the past few months.

Among the changes that the Pacers have made includes the firing of head coach Nate McMillan, who went 183-136 in four seasons at the helm, while helping Oladipo transition into one of the league’s top players. McMillan’s dismissal occurred just two weeks after the organization gave him a contract extension, so maybe the All-Star sees the decision as being a little dysfunctional, and makes the entire front office look bad.

So what comes next for the Pacers and Victor Oladipo? Well, that’s anybody’s guess. There have been rumors swirling that the player is more than available and that he’s bound to get moved before next NBA season, but who has the assets to come snatch him up? More importantly, how will Oladipo respond to this report about pitching himself to opposing teams during games last season? That’s a heavy apology to Indiana teammates should he not get traded and the report is true.

Having guys get frustrated and asking to get traded isn’t something new. We’ve heard reports of players doing it during games in the NFL — looking at you, Odell Beckham Jr. and Jarvis Landry, and, while it’s embarrassing for everyone involved, it usually gets addressed internally and everyone sweeps it under the rug. In Oladipo’s situation, will Indiana have patience and forgive him, or is it the final straw that leads the team to ship him out of town? It’s uncertain, but it sure sounds like he’s looking for a fresh start elsewhere.