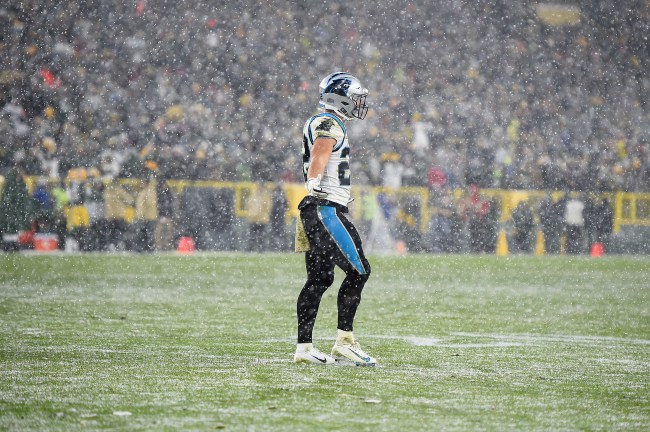 Week 10 of the NFL season wasn’t all that bad, really. There were “only” six teams out on BYE Weeks: The Broncos, Texans, Jaguars, Patriots, Eagles, and Redskins. For one thing, the Pats and Texans being off in the same week should illegal at this point, and then they throw in four others, including Teflon Von Miller and a possible appearance of Gardner Minshew wearing jorts on the sideline?

Talk about a slap in the face by the schedule-makers. But at least there was the following inspiring news nugget prior to the 1pm games starting.

With Jeff Driskell, Brian Hoyer and Ryan Finley starting today, exactly half of the NFL will have turned to multiple starting QBs this season.

We can also forget seeing Cam Newton again this season and next time we do see him it likely won’t be in Panthers uniform. Yup, it’s already starting.

On the plus side, we were treated to Bills-Browns, Lions-Bears, and Giants-Jets — all at the same time! — and no one appeared to be more delighted to attend the great battle of New York than Eli Manning, who rolled out of bed, threw on a vest and drove to the stadium.

There’s no way in hell he even bothered to grab a coffee.

Never thought we’d see Eli in full IDGAF/I slept in a sewer mode, but never say never in the NFL.

Now enough is enough of the depressing chatter, there’s no better time to discuss what happened off the field than right now.

The Chiefs are seriously one confusing mess. The Titans? You really lost to the Titans?

On the plus side, Patrick Mahomes confidently rolled into Tennessee in proper style, like he just finished binge-watching Justified.

While we fly, rate these fall fits

All hail Christian McCaffrey in this three-piece masterpiece. Guy looks like he’s been doing this for as long as Tom Brady.

Everyone in the NFL has been put on notice and should already be hearing CMC’s footsteps.

It only took one week and, just like that, Baker Mayfield’s back!

Chances he consulted with Odell Beckham and Jarvis Landry on how to put last week’s podium debacle behind him? Six billion percent.

Now all I need is to find out how to get my hands on those suede purple Jordan IVs.

Knew we could count on JuJu to be the first player to wear a cape this season.

Yes, Balenciaga officially lists it as a “Men’s Black Logo Faux Fur Coat” for a mere $3,500, but NO NO NO: Make no mistake, this is a cape.

What a legend. Consider yourself warned, Niners.

OK, that’s it. Stefon Diggs has officially joined rarified air as a member of the DeAndre Hopkins “everything looks badass on me” club.

Rookie defensive end Quinnen Williams carrying around a giant chain like the late Junkyard Dog in case anyone talks shit about the ‘Bama-LSU game? That’s honestly my best guess.

No idea what’s happening and I don’t follow the Jets close enough to care that much.

Showing up & showing out for #SNF 🌟 #MINvsDAL

Amari Cooper continues to style and profile every single freakin’ week and someone badly needs to do a special on this dudes’ car collection ASAP.

My god, Daniel Jones and his plainer than plain, boring-ass approach has quite literally become a real-life version of the “Michael Cera Walking Sad” GIF.

To be fair, though, it would be entirely wrong of anyone to expect young Daniel to be high-stepping all over the place like Deion Sanders considering the way he’s been playing lately.

Aaron Rodgers went with a much more fashionable look than we’ve become accustomed to seeing while also maintaining his staunch refusal to ever smile in public under any circumstance. Seems fun!

Sam Darnold’s facial expressions will always, always kill me. I do like the jacket, though. Casual, yes, but it definitely cuts through the clutter a helluva lot better than his continued embodiment of all things Spaulding Smails.

Word of advice to Kirk Cousins:

Please don’t attempt to do the “squinty pose that’s not supposed to be a pose even though it IS a pose” thing. Looks like a complete creeper who’s wearing an invisible sling.

While it’s highly doubtful that was the goal of the shot, it’s very nice to see Kirk is back to the basics and staying in his lane.

Is this Jamal Adams' best game as an NFL player?

"This is nothing…I can tap into a whole nother level, this is just the start" pic.twitter.com/b7daxYIuFh

Between the glorious shirt last week and the snakeskin jacket this week, nothing is stopping Jamal Adams. Not even being a Jet.

I’d personally rather take a bunch of crayons to a blazer. But HEY, that’s just me.

My love for the sombrero is deep and sincere. I honestly hope that Aaron Jones throws one on top of his helmet one of these weeks, ideally in the season finale against the hilariously inept Lions.

Would probably end up being a 15-yard penalty, but well worth it.

The Derrick Henry drip has been absurd — in an exceptional way — these past two weeks and there’s no question he’s well aware of it.

.@Lj_era8 says he practiced the spin move in the walk-though in slow-motion 🤣🤣🤣 pic.twitter.com/AAtqBiSO2q

The meteoric rise of Lamar Jackson has been insane to witness. Rather appropriately, he’s now draping himself in Versace.

Lamar Jackson in full “Deal with it” mode. pic.twitter.com/A5LbpEjPeq

OK, this might be the greatest sideline stunt of the season. Confidence level PEAKING.

Gerald McCoy, who was so badly robbed of a safety he should sue, is never not smiling.

There’s literally not one bad thing you can say about this bundle of joy, especially in that hat and jacket.

"It’s not the outcome we wanted, but there’s a lot for us to learn from and grow from."

Sure, Dak was looking dapper but all I will ever be able to think of when I see this guy is “Dancin’ Dak Prescott.”

We all owe a bit of gratitude to the SNF production crew for cueing up what’s already become infamous footage and thus, creating an NFL meme that will last a lifetime.

Now do yourself a favor and get to Twitter for the sole purpose of searching #DakDancesToAnything.

You won’t regret it one bit.

Jaylon Smith reppin’ the Cowboys self-proclaimed “MVP Rally Cat” with the stellar addition of a HOTBOYZ chain. Because of course he did.

Zeke in the fresh new suit out there sporting the expression of a dude who’s not gonna get one decent block to save his life.

And he was right. I won’t mention how much this killed my fantasy team because this is neither the time nor place to do so.

Kyle Allen’s jacket looks ENORMOUS for his frame but should we give him the benefit of the doubt and just say it’s a bad angle? Sure.

A Louis Vuitton jacket paired with a “Dragon Ball Z” chain, just as well as all drew it up.

Bottom line, when you get clocked running 21+ mph into the endzone and leaving everyone in the dust, you wear whatever the hell you want.

Between this outfit and the aforementioned TD, Mecole Hardman is quickly becoming a national treasure.

Melvin Gordon switched things up and went with the underrated “all-business, no bullshit” route.

For whatever reason, he doesn’t get the attention he warrants, but make no mistake about it: This is one of the smoothest cats in The League.

I be rocking furs like it’s snowing in LA!

See, this is what Kirk Cousins was trying to do in his GQ-like shot that failed.

😁 My Birthday Suit!! @gentsplaybook brings it for me every week!

It happened to be Kyle’s birthday this weekend and he celebrated with impeccable style and two TD catches against the Cowboys, including a filthy one-handed grab that set the tone.

Locked in, and focused 😤 | #Falconsfits

Feel free to join in me a thunderous “booooor-ring, booooor-ring” chant in the direction of the surgeon of sizzle, Dr. Matt Ryan.

Someone, anyone please show Matt Ryan this video at once. He’s got a full seven weeks left to change the narrative.

Make it happen and make it snappy, Matty.

QB1 in the building.

It took 10 weeks but Jared Goff has finally made his debut here and I gotta say, it’s not bad at all.

Nothing quite like expecting the worst and being pleasantly surprised that it doesn’t suck.

Dolphins cornerback Chris Lammons got the Popeyes’ Chicken sandwich! To some — to many people, actually — that’s ALL that matters these days.

Body by Taco Bell, chains by Lamar and Hollywood 🤣

Matthew Judon is the Ravens hero who said “Body Built By Taco Bell” during the MNF intros before their win over the Patriots last week and now he’s blessed the world by dialing up his chain game — not to mention his nip game — to an immeasurable degree.

The perfect travel set – @TheWebster has me ready for any city. Week 10 #T2StyleSeries

Not first on my list of outfits but definitely not last either.

What I do find myself focused on is that unbelievably good watch. Gimmee, please.

If you didn’t already love Titans linebacker Daren Bates, you do now.

The undeniable charisma is popping off the page and slapping you right in the face.

Michael Thomas is the shit for wearing these black and gold AJ1 cleats. Pure beauties.

Stefon Diggs’ cleats for tonight #Vikings by a million pic.twitter.com/bDNwrd48nT

Of course Stefon Diggs — easily one of the more creative players in the league when it comes to customization — wore cleats with Stone Cold flipping us all the bird.