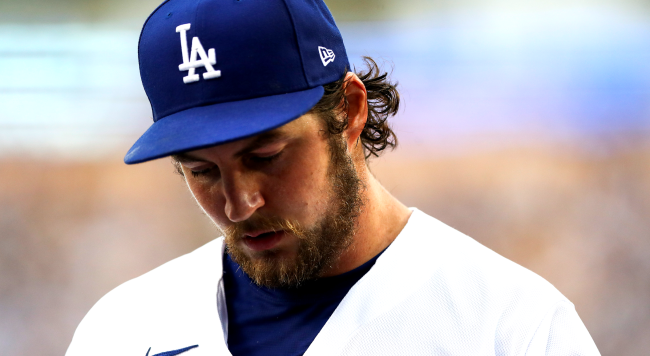 Trevor Bauer entered the 2021 Major League Baseball about as high as a player can be. He was coming off a brilliant season where he was named the 2020 NL Cy Young Award winner after posting a tiny 1.73 ERA for the Cincinnati Reds. He had parlayed that success into a three-year, $102 million contract with the Los Angeles Dodgers. And his new team looked to be the favorites to take home another World Series title.

The season started out well enough. Bauer was 8-5 with an excellent 2.59 ERA for Los Angeles, but after his June 28th start against division rival San Diego everything started to unravel.

Bauer has been on paid administrative leave ever since that start amidst allegations of sexual assault made by a woman who had been granted an ex parte restraining order against the pitcher.

Last week, that administrative leave was extended for a seventh time, meaning the soonest he will return to the Dodgers is Sept. 3. Due to his current status, Bauer is also now ineligible to participate in the 2021 MLB playoffs.

Despite a judge ruling against his accuser’s request for a permanent restraining order in August, Bauer is still under investigation by the Pasadena Police Department.

Related: Trevor Bauer Accuser Texted ‘Give Me 50 Million And Just Slap My C–t’ After First Encounter

There is no sentencing recommendations. That will be up to the DA.

Pasadena PD Lt. Carolyn Gordon told The Athletic: “We have presented that case to the DA’s office, and it’s currently under review.” https://t.co/7MhKVAubIk

Now, according to ESPN’s Jeff Passan, Bauer may be out of baseball even longer. As in, permanently.

It was reported in July that a “majority” of Dodgers players do not want Bauer to return to team, regardless of the outcome of his legal battle. He could also still face a lengthy suspension from Major League Baseball, even if he isn’t found guilty in a court of law.

Regardless of whether Bauer is charged with a crime, sources around the sport told ESPN they expect the league to levy a significant suspension against the 30-year-old. Further, front-office officials question not just whether the reigning National League Cy Young Award winner will return to the field with the Dodgers but whether any team in MLB will be willing to roster him after multiple women have accused him of abuse.

In recent weeks, ESPN spoke with more than two dozen sources — executives, owners, lawyers, players and others familiar with how the league’s domestic violence policy operates — to assess Bauer’s future. While MLB and Bauer’s camp declined comment, the picture that emerged is one in which Bauer will remain a prominent figure in baseball even as he’s not in a uniform, with him protesting the discipline handed down and trying to salvage his career and money.

If Bauer can still pitch even remotely well after all is said and done, some MLB team out there will certainly sign or trade for him, right? Maybe not.

First of all, Passan states “the question isn’t whether Trevor Bauer will be suspended. It’s a question of how long.”

The expectation around the sport is that the league would pursue a suspension of at least one year. Multiple sources suggested a possibility of a two-year suspension. The league has been tight-lipped about any potential discipline as its investigation remains open and, accordingly, it has not made any decisions. Even without a sense from inside the league of where it’s leaning, sources cited a confluence of factors leading them to believe this could be the longest domestic violence suspension since the implementation of the policy in August 2015.

Adding to Bauer’s troubles is the fact that another woman, in Ohio, accused him of a similar sexual similar assault in 2017.

Both of Bauer’s accusers have been cooperating with Major League Baseball on its own investigation of the pitcher.

As Passan explains, “MLB can impose whatever sort of discipline it pleases.”

He also points out that of the 13 players suspended by MLB under their domestic violence, sexual assault and child abuse policy, 10 were not publicly charged.

Plus, there is precedent. Back in March, MLB suspended reliever Sam Dyson for the full 2021 season after allegations were made by his ex-girlfriend.

Dyson hasn’t pitched in the Majors since 2019. Bauer, on the hand, was in the league right up until his paid leave – and has been one of the loudest critics of MLB leadership.

“This is going to be a tremendous war,” someone familiar with Bauer’s defense methods told Passan. “He’s a person who needs complete and total vindication. So he’s gonna fight this to the death. Maybe his own death.”

That, combined with the brutal allegations, fear of public backlash, Bauer’s penchant for publicly defying authority, his unfiltered social media prescence, has the people Passan has spoken to saying that Bauer may pitch again professionally. It just won’t be in Major League Baseball.