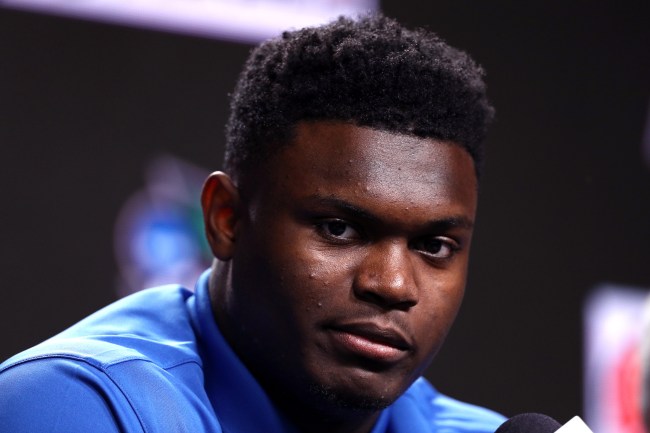 What a year it’s been for Zion Williamson, huh? Not only did he go from one of the most hyped college basketball players ever to the top pick in the 2019 NBA Draft, but then he sustained an unfortunate injury that sidelined him for a few months, leading to an even bigger anticipation once he did make his official debut. Yeah, it’s been one helluva ride for the 19-year-old to this point.

Unfortunately, given his rise in popularity and stardom during that time, there have been whispers about how Zion Williamson may have gotten some preferential treatment. That’s because his former agent, Prime Sports Marketing’s Gina Ford, alleges that Williamson received “impermissible benefits” — such as money and other favors — in exchange for a commitment to play college ball at Duke University. The lawsuit was filed by Ford in May, with some of the allegations detailed below.

NEW: Zion Williamson’s former marketing agent has served requests for admission in their lawsuit asking him to admit that he received “money, benefits, favors or other things of value” to attend Duke University and to wear and/or use Nike and Adidas.

It’s important to know that Zion Williamson did originally sign with Prime Sports after he left Duke and declared for the NBA, but he filed a lawsuit to terminate the five-year contract on June 13 of 2019, per 247 Sports. That’s probably why all of this is getting even uglier now.

After Williamson did recently file a protective order against Gina Ford to block her inquiry about him receiving improper benefits while at Duke, which was denied by a court, the ongoing fight is getting even nastier. Ford has now come out claiming that luxury cars and a new house Zion’s parents’ lived in while he was in college are proof that the player received improper benefits and took money from the Duke. Take a look below at the latest allegations against the NBA rookie.

Gina Ford also offers as evidence the wiretapped conversation between Merl Code and Kansas asst. coach Kurtis Townsend regarding monies being offered to Zion to attend KU. Judge Kaplan ruled that this was inadmissible in the SDNY college basketball corruption case. pic.twitter.com/lvvOKtDxxd

Gina Ford says that the 3 luxury cars registered to Zion Williamson’s parents justify discovery (meaning depositions under oath) “to determine whether these vehicles impacted his eligibility to be/remain a ‘Student-athlete.’” pic.twitter.com/cp5VTm8SwQ

For those not privy to the fine print above, Ford’s allegations contest that Zion Williamson’s parents moved from a house where they were paying less than $900 a month in rent before their son played at Duke, to living in a $950,000 house that cost nearly $5,000 per month while he was at the university. Something sure seems fishy about that.

Naturally, Zion’s attorney, Jeffrey S. Klein, responded to Ford’s latest allegations by outright denying them, even calling them “a shameful attempt to distract from their admitted violations of N.C. law,” and “a continuation of the predatory acts the agent statute was designed to protect against.” So, to say that he and his client are denying all of this is an understatement.

NEW: Zion Williamson’s attorney (Jeffrey S. Klein) issues statement calling Gina Ford’s latest court filing “a shameful attempt to distract from their admitted violations of NC law” and “a continuation of the predatory acts the agent statute was designed to protect against.” pic.twitter.com/izegdydGVo

Given the latest update in the Zion Williamson allegations, it sure seems like things are about to get really messy between the Pelicans rookie and his former sports agency. With Gina Ford and Prime Sports clearly upset about the young star leaving their agency for a higher profile group, Creative Artists Agency, it seems like the former is prepared to do anything it takes to prove Zion breached his contract with Prime Sports, did accept improper benefits from Duke, and, as a result, will try to recoup some sort of settlement in order to stay silent about any potential damaging info on the player from being released.