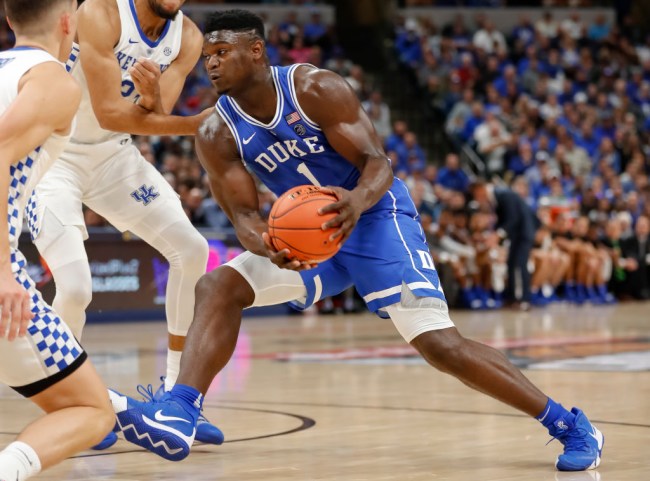 Through the first three games of his college career at Duke, Zion Williamson has proved that the immense hype was warranted. The superhuman athlete from South Carolina gained national notoriety in high school for his grown man frame and violent dunks, but his detractors questioned how his one-of-a-kind skillset would translate at the college level.

In hindsight, that line of questioning is laughable, as the 18-year-old is averaging 25 points and 10 rebounds a game at Duke.

Zion is a once in a generation athlete whose physical tools and transcendent coordination could span over multiple sports. Eric Mateos recognized that early, and decided to tempt Williamson with a pigskin.

Eric Mateos, currently the offensive line coach at Texas State, was the tight ends coach at LSU in 2016 under then-interim head coach Ed Orgeron. This was right around the time when Williamson’s high school dunk compilations were garnering millions of views online.

According to ESPN, Mateos saw the highlights, obtained Williamson’s phone number, and offered him a full football scholarship to LSU. Not a bad offer for a kid who hadn’t played organized football since his childhood.

“I thought, hell, why not, he’s probably the best damn tight end to ever live,” Mateos said.

“Coach O said go recruit the best athletes in the country, and that’s what I tried to do,” Mateos added. “Any time you have an athlete that can generate that much explosive power in a controlled manner, that’s a level of elite that translates to a bunch of different football positions.”

If you think it’s silly to recruit a dude who has zero high school football game tape, consider this: At 18 years old, 6’7” and 285 pounds, Zion would be the second heaviest player in the NBA behind Boban Marjanovic. He’s 35 pounds heavier than LeBron James.

Speaking of LeBron, he played a couple years of high school football and in his junior year alone caught 61 balls for 1,245 yards and 16 touchdowns earning first-team All-Ohio Division IV honors for the second straight year. LeBron was recruited to play receiver by Ohio State, Alabama, Miami and Notre Dame. He turned down the opportunity to be a football star for some reason. Oh, I think it was to eventually become one of the best basketball players to ever live.

Maybe Zion’s up next.

Air To The Throne 👑 pic.twitter.com/onVeuCmPey