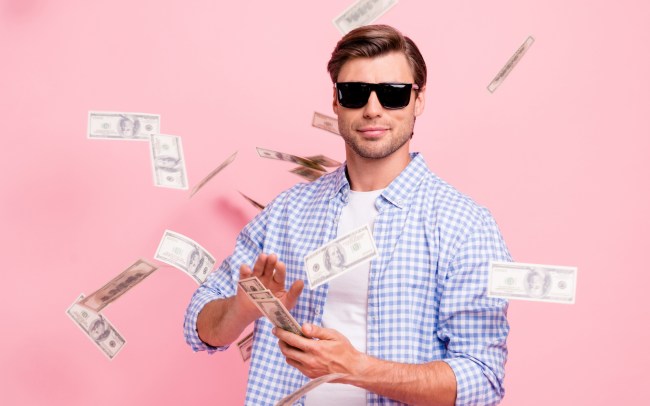 It is conceivable that when our forefathers wrote in the Declaration of Independence that all Americans shall have the right to “Life, Liberty and the Pursuit of Happiness,” it was all part of a drunken joke.

Those powdered wig-wearing bastards wanted every citizen of this country to think when they were just young, future taxpayers that living in the United States guaranteed them some unalienable ticket to live out a blissful life that supersedes any other existence found on this miserable planet.

But as many of us have learned as we got older, the devil is in the details, and the details are fucked.

You had damn well better know that we as a society have grown privy to the sarcasm behind the phrase “pursuit of happiness.”

We now fully understand that what the nation’s first leaders were really trying to tell us is: “While you guys have the right to chase the shit out of whatever makes you happy, it’s going to take a fuck-load more than just this measly piece of paper for you to find it.”

And how did America respond to this illusionary freedom? By becoming lunatic consumers, what else?

Some people go out and spend all of their hard-earned money on random things from time to time in an attempt to fill the pathetic gap in their souls that the Committee of Five left them with centuries ago.

This is known as retail therapy.

It is an act where some Americans – that disgruntled sector of the population consisting of the saddest and loneliest – hit the town regularly for the sole purpose of snatching up their material desires to make them feel better about themselves.

This depressed class of citizen buys up new cars, big screen televisions and even makes high-dollar fashion upgrades all to find some twinge of happiness that they have failed to achieve in other areas of their lives.

But lo and behold, we’ve been doing it all wrong, according to a new study from the scientific minds at Cornell University. It seems if we really want to achieve legit, real-deal happiness in our lives, we need to stop dropping so much cash on material possessions and get out there and experience the world.

Although researchers concluded that buying random shit does, in fact, make people happier, the feelings derived from those purchases are temporary at best. It is only through our personal experiences that we can find a level of pleasure where the reverberations of the shit-eating grin carry on the longest.

This means travel and participation in other events are essential to achieving true happiness, says lead study author and psychology professor Thomas Gilovich.

He says because personal experiences, like taking a trip to France or even attending a concert, better define the identity of a person, the happiness experienced during those times has more longevity than that of a simple purchase. After all, you can’t buy those “remember when” moments.

“Our research is also important to society because it suggests that overall well-being can be advanced by providing an infrastructure that affords experiences – such as parks, trails, beaches – as much as it does material consumption,” Gilovich said.

This is not the first time science has found a correlation between experience and happiness.

Researchers out of Harvard University found long ago that the people who connected with their family and friends through shared experiences were among the healthiest and happiest of the tribe. In a sense, that pursuit of happiness that was promised to us by our forefathers is more attainable by merely creating memories with our people.

This doesn’t necessarily mean you have to take a trip to Europe with your family to be happy, only that carving out more time for such things are better at filling the gap of depression than spending all of that money on meaningless possessions.

It turns out that Thomas Jefferson and crew never understood the concept of happiness. This is probably the reason the United States is the only developed country where companies are not required by law to give their employees paid vacation or holiday time.

It’s one of the reasons that U.S. citizens are some of the most miserable in the world. Other countries like France, Germany, and Portugal provide their workers with around 35 paid days off each year.

Whoa! We can’t even imagine.

Presumably, this policy was put into place to ensure their people can travel and share in other life experiences that are not work-related. They understand there is more to life.

Look, we don’t know who we’re rooting for yet in the 2020 election, but the candidate who proposes giving us a month off every year is probably going to get our vote.