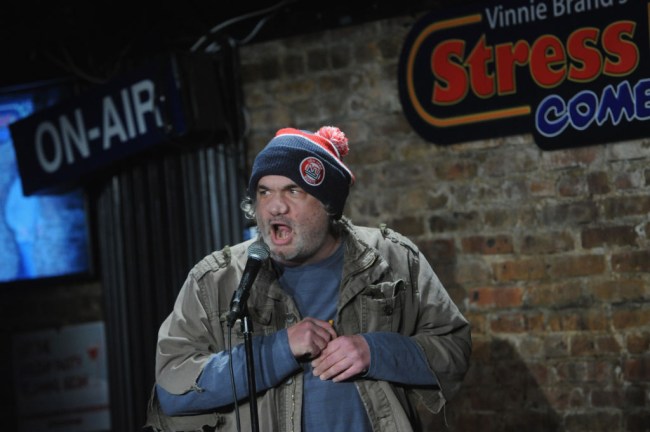 Artie Lange is not ashamed of his deformed nose and the comedian might not get his broken schnoz fixed because it is a reminder of his years of drug abuse.

Artie has said in the past that his deformed nose is the result of “three decades of drug abuse.” Artie destroyed his nose by snorting glass. His gambling addiction caused him to get kidnapped and punched in the face, which broke his nose and did even more damage.

RELATED: Artie Lange Gets A Second Chance After Arrested For Violating His Drug Probation In May

Last week, Artie Lange finally emerged from rehab and he looked absolutely tremendous. After being sober for more than seven months, the Crashing star was visibly thinner, appeared happier, and looked healthier than he did months ago.

While Artie looked amazing, unfortunately for him, the damage had already been done to his nose from decades of drug abuse. But don’t expect Artie to get surgery to fix his deformed nose because he loves it.

“Obviously my nose is still a mess, but it’s funny; I like that as a reminder,” Artie told TMZ. “Because it reminds me of the insane life I led.”

“A lot of bad decisions I made,” Artie continued. “30 years of drug abuse, snorting heroin, and cocaine. I accidentally snorted glass once, which is a long story. I got punched in the nose by a guy collecting money for a bookie.”

“This nose should be a reminder for young people, that even if you make money and have success, you can still live like a straight-up scumbag,” Artie warned. “I never was a bad person, but I did a lot of bad things because I was addicted to drugs.”

“I’m glad that people have responded well to me looking better at least,” Baby Gorilla said.

In May, Beverly Hills plastic surgeon to celebrities and star of the reality TV show Botched Dr. Paul Nassif offered his expertise to fix Artie’s misshapen nose. “Artie I hope we can help you here at Botched; I would love to fix your nose,” Dr. Nassif told Artie in a video. “And God-willing that you can get yourself clean and I know it is very hard because it is a disease. Drug addiction is a very difficult thing and I hope you have the support that you need. And when you’re ready we’re here for you.”

Dr. Nassif examined photos of Artie’s face and made a diagnosis of “saddle nose deformity.” “Like a boxer would get, when you have a lot of trauma to the septum, like from getting hit or drug abuse, especially cocaine could deteriorate the septum or collapse,” Dr. Nassif stated.

Artie responded to Dr. Nassif’s offer of correcting his contorted nose in the video. “Look, I’d love to do that,” Artie said of appearing on the reality TV show about cosmetic surgery. “I’m gonna get it fixed eventually. But it looks a little bit better, I don’t think it could look much worse.”

In 2017, Artie Lange was arrested on heroin possession charges and he had 81 decks of heroin on him. He received probation for four years and the court ordered him to attend a six-month drug treatment and rehabilitation program. The former Howard Stern Show sidekick also had to work at local jobs in northern New Jersey.

We at #TeamArtie wanted to share this with everybody. https://t.co/PvWScP7DOQ