A Gigantic Asteroid Going 18,000 MPH Is On ‘Close Approach’ With Earth This Month 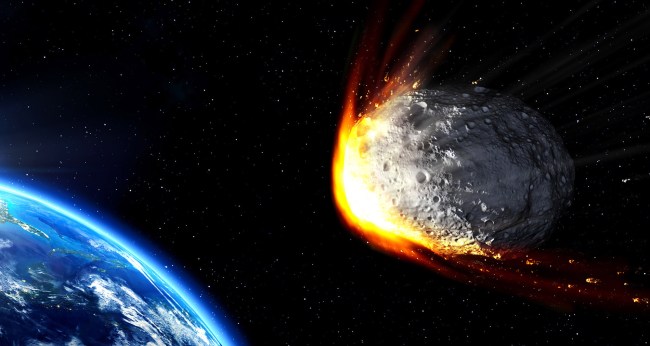 Have you heard about the reports that say if an asteroid were to be headed directly towards Earth there is literally nothing we can do to stop it? Because that’s the disturbing reality that we face as a planet.

Not that we have anything to worry about for awhile, at least according to NASA, who we know never obfuscates the truth and never hides anything from the American public.

For example, a giant asteroid, 2008 GO20, is headed towards Earth later this month at around 18,000 miles per hour, and NASA says it’s all good.

The Apollo group space rock, which has a diameter of between 92 meters and 206 meters (301 feet and 675 feet), is supposed to blow by Earth on July 24 (although one NASA report confusingly says it will happen on July 26).

How close? Take a look at a few time lapse diagrams comparing Earth’s orbit with the orbit of Asteroid 2008 GO20.

As you can see, in terms of outer space, Asteroid 2008 GO20 is actually going to be getting very close to our planet when it whizzes by.

According to NASA, “A Near-Earth Object (NEO) is generally defined as an asteroid or comet that approaches our planet less than 1.3 times the distance from Earth to the Sun (the Earth-Sun distance is about 93 million miles). Most NEOs pose no peril at all. It’s the small percentage of Potentially Hazardous Asteroids that draws extra scrutiny. These objects are defined as those that approach Earth at less than half the Earth-Sun distance.”

As for the “Colossal God Of Chaos” asteroid that is on course with Earth for the year 2068 or several other dates in the future? Thoughts and prayers…