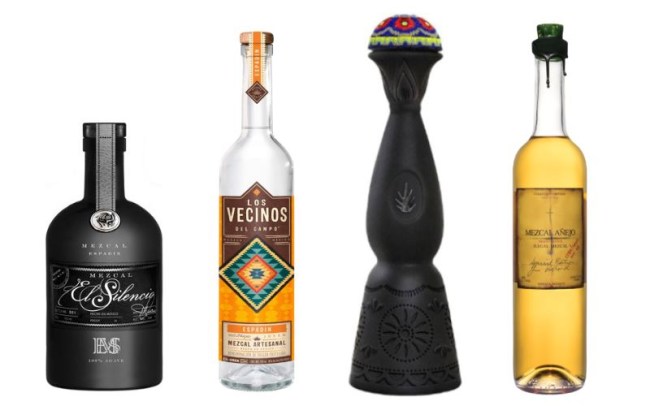 You know all about tequila and now you want to open your horizons to another magnificent Mexican spirit — mezcal. If you shop for mezcal, you’ll notice that many of the brands will be unfamiliar to you. But do not fret because we have curated a list of some of the best mezcals for 2019.

Clase Azul Mezcal, made in Durango from Cenizo Agave!

Clase Azul’s agave is milled by hand instead of using a donkey and tahona. The Durango agave is fermented in red oak then the piñas are slow-roasted with firewood and volcanic rock for three full days. Then it is double-distilled in alembic copper stills. This 88 proof luxury joven mezcal has a complexity, unlike any other mezcal.

While cheap mezcals taste like they have liquid smoke taste, Mezcal Clase Azul has a very subtle smoke flavor. This makes this artisanal mezcal perfect for your transition from tequila to mezcal. Mezcal Clase Azul has an earthy, minerally flavor because of where the agave is grown. Mezcal Clase Azul is super smooth and has pleasantly sweet hints of caramel and vanilla. Absolutely perfect for enjoying neat. Another unique aspect to any Clase Azul spirit is the beauty of their bottles and their mezcal is no exception. The Mezcal Durango bottle is modeled after matte black clay pottery and has the texture like volcanic rock. The decanter, which is hand-carved by Mexican artisans, boasts a vibrant hand-beaded top.

RELATED: What’s The Difference Between Tequila And Mezcal?

Ilegal Mezcal is not only a magnificent mezcal, but it has a spellbinding origin story. John Rexer loved mezcal, but he lived in Guatemala where he owned and ran a small bar named Café No Sé. To supply his bar with plenty of mezcal, John would travel to the heart of mezcal country to get the beloved agave spirit. John and a friend took the 11-hour ride from Antigua, Guatemala to Oaxaca, Mexico. The two men attempted to smuggle about 60 bottles of mezcal from Mexico to Guatemala and he dressed like a priest because who would suspect a priest of smuggling 60 bottles of mezcal?

Around 2006, Rexer stopped smuggling in illegal mezcal from Mexico. John had spent a lot of time in Oaxaca in the 1990s, so he knew where to find the good mezcal. He knew which producers made mezcal the right way and who treated their employees fairly. He created his own brand named Ilegal Mezcal. You’ll notice that it is not spelled “Illegal Mezcal,” that is because the U.S. Alcohol and Tobacco Tax and Trade Bureau, statutorily named the Tax and Trade Bureau (TTB), prohibits the name “Illegal” and “Ilegal.” So if you look closely at the bottle, there actually isn’t a company named but instead says “Produced for Ilegal Mezcal” to get around the TTB regulations.

Ilegal Mezcal is a small batch mezcal from Tlacolula, Mexico that is handmade from 100% Espadin Agave. The mezcal is slow-roasted in an earth pit with mesquite and eucalyptus for a wonderfully smokey flavor. The piñas are crushed with a millstone and fermented in oak before being double distilled in alembic small copper stills. Ilegal makes three different varieties of mezcal: an unaged joven, reposado and anejo (Learn more about the differences HERE).

The vanilla-hinted reposado is aged in medium-char American and French oak barrels for four months, while the anejo is aged for 14 months. The anejo is unlike any other mezcal because it is less smokey and has a heavenly honey flavor with hints of orange and cocoa, but balanced with some slight spice, outstanding for sipping. The bottles have a cork top that is sealed with wax and each bottle is individually hand-numbered with the lot. Ilegal Joven Mezcal costs $50 from Cask Cartel, $60 for reposado and $100 for anejo.

RELATED: Here Are The 12 Best Tequilas At Every Price

Los Vecinos del Campo Espadin is made in the Valles Centrales region of Oaxaca by a group of 10 master mezcaleros. The creation process is the same they’ve used for generations, where they slow-roast the agave Espadin piñas underground. The piñas are crushed using a stone wheel, then fermented in wooden and double distilled in copper pot stills. The Los Vecinos del Campo Espadin was awarded 94 points from the 2018 Ultimate Beverage Challenge. This joven is 45% ABV. With the first sip, there’s lots of spice up front and then sweeter at the end with hints of pineapple. At $30, this is a fantastic value.

RELATED: There Are 5 Types Of Tequila, But Do You Know The Difference?

El Silencio Mezcal is expertly produced in San Baltazar Guelavila, Oaxaca and made by Master Mezcalero Pedro Hernandez, a ninth-generation Maestro Mezcalier. El Silencio has their joven in an all-black bottle which is made from 100% Esapadin Agave and then they also offer Joven Ensamble Mezcal, which uses a blend of Mexicano, Tobasiche and Espadin Agave that have matured 10 to 12 years. The agave hearts are slow-roasted in a mesquite-lined pit and then crushed by a horse-drawn tahona. Silencio utilizes a natural fermentation process and then the mezcal is double-distilled in copper pot stills. There is a charred taste, but not overpowering with smokiness, with a peppery finish of dried fruit.