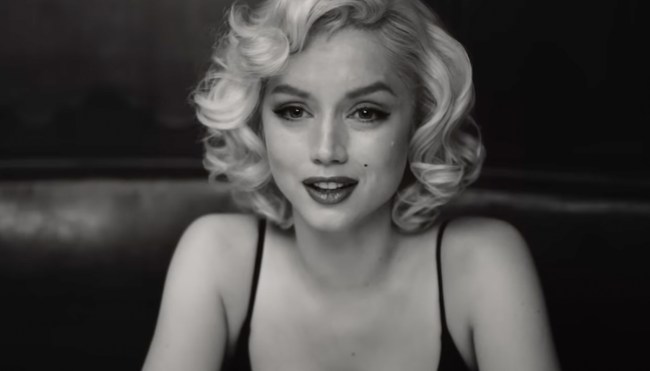 It’s been hard to ignore the hype surrounding Blonde, the upcoming Netflix movie starring Ana de Armas as Marilyn Monroe that was initially scheduled to drop last year before having its release pushed back after the streamer reportedly took issue with the graphic nature of the project.

Director Andrew Dominik expertly seized on that controversy, as he’s compared Blonde—which has received an incredibly rare NC-17 rating reflective of his apparent goal to “offend everyone” who watches it—to Citizen Kane and Raging Bull and asserts it will be viewed as one of the top 10 films ever made.

The actress portraying the iconic actress has also done her part to drum up publicity ahead of its release by describing the “daring” and “unapologetic” project as “the most beautiful thing she’s ever done” (for what it’s worth, Joyce Carol Oates—the author of the novel Blonde is based on—has also given it her seal of approval).

We got our first glimpse at what’s in store when the first images and a teaser for Blonde dropped last month, and now, we have our best look to date courtesy of the trailer that was released on Thursday.

If the trailer is any indication, anyone who was concerned de Armas would have difficulty nailing the voice of the Hollywood legend should have those fears assuaged, and it’s hard to ignore the fairly stunning cinematography that swaps between black-and-white and color shots that capture the aesthetic of the era where Monroe skyrocketed to global fame.